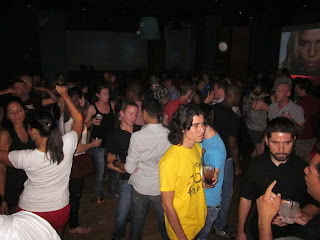 If you go see the Iranian drama “Circumstance”  ("Sharayet"), directed by Maryam Keshavarz and in Farsi, you will wonder how a fill like this could have been shot in Iran at all. It wasn’t.  Most of the filmmaking was done in Lebanon, with a lot of technical help from the US and France.  At several critical points in the film, we get a breathtaking shot of Tehran from a hill, were maladjusted but smart character Mehran (Reza Sixo Safai) would provide for his wife and kids with a mansion, he says. Earlier, he has been told “a Muslim gets married and provides for a family.”
And that’s a lynchpin of religious fundamentalism when it deals with sexuality (including homosexuality), and not just Islam.  The idea isn’t just that if you make a choice (to perform an act that can create a baby) you follow through with the responsibility you (pro)created. It’s that you belong to a family and a culture and you owe the deepest parts of your life to it because it gave you life. Fundamentalism believes that if it can’t demand this of everyone, it’s culture cannot survive.
Now, everyone knows that the “meat” of the story is the clandestine lesbian relationship of two women, Atafeh (Nikohi  Boosheri) and Shireen (Sarah Kazemy).  Much of the film focuses on Atafeh’s family. Her parents are moderate and have a nice home with grand piano and a curious record player with a victrola horn (despite the fact that the film is set in current time).  Mehram, Atafeh’s handsome brother, arrives home from drug rehab and says he is giving up music, and that is sad; there is a wonderful moment where Mehram and his sister play some Bach together on the grand piano   (curiously, there is a similar music-making scene in the GLBT festival-circuit  flick “Eating Out” set in Arizona).  Mehram takes on the bizarre self-assignment to tape the two women surreptitiously (reminding one of the tragedy involving violinist Tyler Clementi  in New Jersey), and mix it with Gus Van Sant’s “Milk” to make an anti-gay “transformation” (or maybe a remake of “Rear Window”).  He takes up Islamist extremism, making a lot of his piety with the formality of his prayers. Yet, there is so much ambiguity in his talk that one quickly picks up on the likelihood of his own repressed homosexuality.  Eventually the authorities get involved, and there is a solution – arranged heterosexual marriage, all for appearances, at least, with some "pomp and circumstance".  The plot becomes positively operatic.
There are plenty of disco and party scenes in the film, and the Iranian young men, quite frankly, including Mehram, are quite spectacularly handsome (the camera dawdles on them even more than it does the lesbian women).  You wish he could have emigrated to the West as Mehram the Pianist and had a real career that he obviously had wanted and been denied.
This is quite an engaging film.  Like Marwem Hamad’s “The Yacoubian Building” (Strand, 2006), it shows the potential of Islamic film even with LGBT materials. Would judges at the Oscars be ready for this next year?
The film is produced by Participant Media and released by Roadside Attractions (and that probably means Lionsgate) and Sundance Selects.  The official site is here.
I saw this at the AMC Shirlington in Arlington VA in the late afternoon show Saturday Sept. 10 before a moderate crowd, in a large auditorium (shot in 2.35:1 aspect).
Posted by Bill Boushka at 6:17 PM