"50/50": Joseph Gordon-Levitt in one of his most challenging roles yet 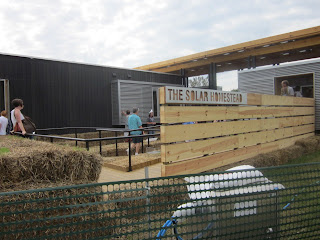 When I lived in Dallas in the 80s, I befriended a young man who told me about how he had beaten off testicular cancer, after a sudden diagnosis.  Dealing with the worst side effects was simple: illegal marijuana.
As long as he used it, he said, he was never nauseated.  And I’ve always felt that either the substance should be a legal prescription to prevent the worst effects of chemotherapy, or else a legal substitute that is just as effective must be offered.
I also had an incident, in New York in the 1970s, that could test my “loyalty” to a friend, although I knew little specifics in this particular situation.
I wasn’t at first going to see “50/50”, but then I saw “Restless” and reviewed it yesterday, and read that this film is, well, better.
Joseph Gordon-Levitt, after his history of versatility (“Brick”, “Mysterious Skin”) and athleticism (remember his tumbling and gymnastics act as host of SNL) accepted the role of Adam, the cancer patient, after James McAvoy backed out “for personal reasons”, according to imdb.  (McAvoy is mentioned with thanks in the credits.)   As we remember from “Inception”, Gordon-Levitt can look wan and gaunt, also. The curious thing here is that he seems fine physically when he gets the diagnosis from a rather aspie doctor who has no bedside manner and pawns off the tough stuff on a young female therapist (Anna Kendrick), and we can predict what may happen.  Adam is a little funky himself (maybe mild Aspergers); he follows the rules enough to stop at lights when jogging, and is afraid to learn to drive. But he can also be very warm.
I used to have a joke, “never go to the doctor.” Here, the cure is at first worse than the disease. The chemo does no good, although his “illegal” behavior quickly tames the side effects.  His buddy Kyle (Seth Rogen) is a bit of a nuisance as far as I am concerned.  In one scene, he invites Kyle to help with the buzz-cut on his scalp – and that’s what it looks like, a Marine’s introduction to Basic.
When it comes to the surgery, it’s pretty serious stuff, and you wonder if he would at least have to be crippled.  This is a movie you want to end happily.

"Kyke" (Seth) seems to impart the bizarre idea that cancer could actually help you "meet  some girls".  Adam buys it. But he seems to already "have one". It seems, though, that the female therapist is a hoarder and Adam has to help her get rid of "this mess" in her car.

Early in the film, Adam mentions "Terms of Endearment", a famous 1982 Paramount film (I saw it in Dallas) directed by James Brooks; toward the end, a character learns she may have cancer when I doctor notices enlarged lymph nodes when giving a shot; the film progresses quickly to a tragic end. No so here, though. But Adam is very blunt in the way he tells his family, "I have cancer".
It’s directed by Jonathan Levine, written by Will Reiser, based on a “true” story. It’s filmed in Vancouver but is supposed to happen in Seattle (“Restless” unfolds in nearby Portland, OR).
The official site from Summit Entertainment and Mandate is here.
Joseph Gordon-Levitt talks to MakingOf co-founder Christine Aylward.
Posted by Bill Boushka at 8:10 PM