"Toy Story 3": Pixar's series continues to show us what it's like to be a toy in a higher being's world 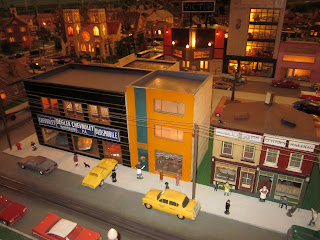 I have several screenplay scripts (most notably “Baltimore Is Missing”) where the somewhat hapless protagonist winds up living as a toy of a kind of Lilliputian in some rogue person’s (or maybe simply higher being’s) model railroad, or perhaps in a model purgatory set up by angels.  It strikes me that the Disney-Pixar “Toy Story” movies are about this idea. That makes them highly political and a bit satirical, a commentary on almost any situation where one class of beings has dominion over others and has no idea of how subordinates feel.   (I could go on about “The Help” some more right now.)
Lee Unkrich (director) and John Lasseter and Andrew Stanton (writers) set all this up in Pixar’s “Toy Story 3”, on last year’s best picture nominations list.  When Andy (voice of John Morris) is getting ready to go away to college at 17, his mother implores him to sort through his old boyhood toys that “don’t get played with”.  He drops the ball trying to store them in the attic, and the toys get driven by Mom over to a day center, where the toys will get played with by a new batch of kids every year (hint: the politics of population replacement and “demographic winter”).
Some of the activity in this film’s middle gets interesting, like the sequence with the “baby doll” that reminds one simultaneously of Chucky (“Child’s Play”) and Carroll Baker.
Finally, Andy gets back on track and offers to donate his toys the right way, so they can be together forever.  He’s not been into baby play for years.
The official site for the film is here.
The movie plot reminded me of an episode of the series “Blue’s Clues”, usually with Donovan Patton and Steve Burns, where Steve goes away to college and the younger siblings have to adjust.
The DVD has a couple of animated shorts:
“Day and Night” (6:05), directed Teddy Newton, with a setting of a little bit of the Rossini William Tell overture.
“Buzz Lightyear Mission Logs: The Science of Adventure” (4:05), made with NASA, has the toys looking at live-action shots of microgravity experiments on the ISS, the International Space Station, including a little bit of medical monitoring.  I suppose one could imagine experiments with micro black holes.   There was a time when space looked like our collective future, and some day it must be if our species is to survive indefinitely.
Posted by Bill Boushka at 8:13 AM