"Rise of the Planet of the Apes": all they want is to go home; but there is a "warning" 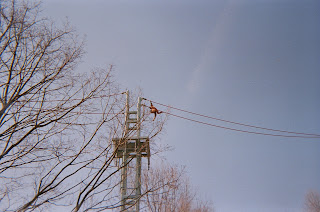 My mother used to say I’m not a climber, whenever there was a problem on the roof.
True, and I was struck indeed by the upper body strength and physical boldness of the chimpanzees in “Rise of the Planet of the Apes”, from director Rupert Wyatt, 20th Century Fox and Dune Entertainment, as the primates swing from the branches of the redwood forest north of San Francisco.
I had actually seen the original “Planet of the Apes” in 1968 at Fort Jackson, SC when in Army Basic during our first weekend of “post privileges”.
The story is a bit contrived, and maybe facile. James Franco plays scientist Will Rodman, who has worked on a couple of virus vectors to implant genes that will cure Alzheimer’s Disease. In chimps, the genes are passed on to progeny.  After an outbreak in the lab, Will takes home a “smart” baby chimp Caesar and raises it as “dad”.  He also treats his dad (John Lithgow) with the virus, and his dad has a brief respite from Alzheimer’s and a normal life for a while before relapsing.
In time, the authorities get wind of all this after some trouble, and Caesar winds up on an animal farm, where he communicates his “plans” to other chimps who break out and stage a rebellion, leading to a battle in the streets of San Francisco and eventually the Golden Gate Bridge. But the chimps – and Caesar can now speak simple sentences – just want to go home to the forest.
The movie has another twist, suggesting a sequel, of what happens to other humans who get “infected” with the virus.  A hemorrhagic fever ensues.  Is this a cross to the coming Matt Damon film “Contagion”?


Here’s the official site.
Picture: Orangutan at Washington DC zoo, 2007.
Posted by Bill Boushka at 6:26 AM