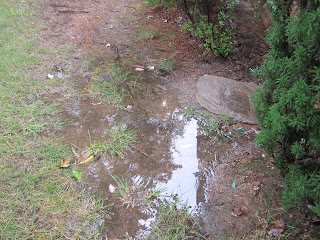 Travel among alternate universes, and  negotiating the time-arrow within a life back and forth, have become a compound fad in independent film this year, and the new British flick from Focus Features and Random House (and Film4, of course), “One Day”, directed by Lone Scherfig (based on the novel vy Dave Nichols), is almost like a heterosexual setting of “Judas Kiss”.  One’s first impression is that Britain changes more during the twenty-three years of the film’s span than the characters do, but that needs elaboration.
You know the set up: a couple Dexter (Jim Sturgess) and Emma (Anne Hathaway) fall for each other on July 15, shortly after college graduation: then the “work” traces their relationships every year that day for the next twenty-some years. Sometimes they will have each other, and sometimes they have other partners. Dexter gets to try-out playing Daddy, and he also takes care of his mother, hands on, as she dies of breast cancer.  His relationship with his own patriarchal father is strained. He moves up in his career as a television producer and daytime TV host (a kind of Nate). Finally, he is back with Emma.
Jim Sturgess is about 32 now, and I think he was at his best as an American geek in Columbia's “21” (“I’m good with math”).  But in this film, he doesn’t age at all between ages 22 and about 40 – nary a gray hair or even whitened stubble in his beard, nor any love handle.  Some actors (Brad Pitt, Tom Cruise) age very well.  Emma, a bit homely to start, doesn’t change much either. But then, suddenly, there is a tragedy. People should be careful on bicycles, riding the wrong way past hidden entrances.  Jim’s character Dexter goes to pieces when losing her, and ages 20 years at once. But then he gets himself back a bit, and becomes younger again, especially with a daughter.  You see the time travel.

All this movie needs is a talking dog or a cat like "Paw Paw".  After all, both partners in this "couple" have commitment issues for all twenty-plus years that the movie spans.
I saw this on a Tuesday night after the DC earthquake, and the film was surprisingly well attended at a Regal, which was late starting the film with a technical issue.


For today’s YouTube, I’ll note that a Facebook friend pointed me to a 1963 short animated film “The Critic” by Mel Brooks, from Columbia, several years before “The Producers”.
(No longer available as of 11/2011; have to look for it somewhere else. )