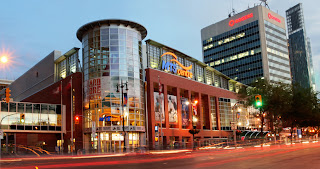 I visited Winnipeg, Manitoba once, in September 1997, shortly after moving to Minneapolis, and it was actually hot that Saturday night.  I even found a gay bar there.  I have driven 400+ miles across the lake country from Fort Frances, about International Falls, MN.  But usually, Winnipeg is the coldest major city on the North American continent. The land around it is so flat, and the shores of the “Great Lakes” nearby look like the edge of the World, the Erasure. This is the Canadian "Midwest".
Guy Maddin actually indulges us with a soliloquy about his upbringing in his hometown with his funky (and David Lynch-like) documentary “My Winnipeg” (IFC, 2007). The film is shot low tech in old 4:3 aspect with most of the footage taken from old black-and-white newsreels, even with steam trains. Winnipeg has been a real city for some time.
In the heart of the film, he hires “actors” to recreate a scene of family life using his own real mother.  The film turns into a stream of consciousness, where more happens in his own mind, and is just supported by the images he finds.  He says “We dream where we walk, and we walk to where we dream.”
After a while, he gets into the issue of tearing down old stadiums (for ice hockey here) because they don’t pander to the rich enough, and he makes fun of some of Canada’s corporate institutions.  Then the film turns mildly homoerotic, as he recalls an old “Golden Boys” contest, to be viewed by women, but featuring a “corridor of thighs” and favoring smooth men.  He even meditates on the old baths, and recalls his reluctance to disrobe in the boys’ area when growing up. Toward the end, he imagines what a Nazi takeover of Winnipeg would have been like.
There are other funky recollections, such as Winnipeg’s only locally produced TV series, “Ledge Man”.
Here is an official site.
Here’s IFC’s trailer for “snowy, sleepwalking Winnipeg”.
Posted by Bill Boushka at 8:50 PM