"A Little Help": a family works out its "true lies" after a tragedy 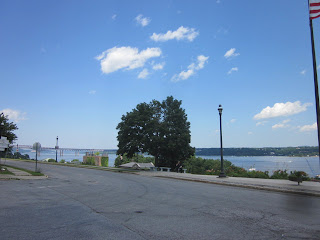 I’ve pretty much skipped Long Island most of my life, having gotten to know the Jersey burbs a lot better. But “A Little Help”, from director Michael J. Weithorn (and Freestyle Releasing) is a somewhat cynical look at heterosexual family life on that long, flat patch of cookie cutter real estate.
Jenna Fischer plays Laura, married to a nice enough real estate broker Bob, played by a now fortyish and variably chested Chris O’Donnell.  He may have seen better days, and his character spends too much time at the office on the road; Laura feels like she needs more “attention”. I’ll backtrack, and note that the film opens with a shot of a talking blue and red parrot in a dental office where Laura works. But pretty soon we’re in the world of summer garden parties ten months after 9/11, and lots of intergenerational dynamics. The film takes its first twenty minutes to bring Bob to his demise, while Laura is trying to get the satisfactions from the Song of Solomon.  Marital sex is supposed to be the most, right?  Bob really isn’t up to it. That particular scene highlights why the heterosexual world could never have worked for me (after I escaped it); it simply makes too many "personal" demands.
After the funeral, Laura’s sister (Lesley Ann Warren) and mother  “intervene” with “a little help” so that she can stay in the house and raise her flabby and falsely brainy 12-year-old kid Dennis (Daniel Yelsky).  Grandma (who thinks Laura is spoiled) wants to send him to a private school, all with white shirts and bow ties.
Enter the true lies. Part of the survival strategy is a malpractice lawsuit against the emergency room doctor, who could have done more (not really); isn’t that what insurance companies are for?   The lawyer (Kim Coates) is creepy. And her little boy makes up a second big lie, that his dad died as a fireman saving people on 9/11.  Nobody seems to get the harm of this.
Laura’s sister’s husband  Paul (Rob Benedict) does start to take an interest in Laura, leading to telescoped ambiguity toward the end.  Paul has a  handsome, shaggy-legged teenage son Kyle (Zach Page aka Zach Goldstein), talented in guitar, but failing in academics, posing a family issue the story could have dealt with in more detail (or could take up in a sequel); the character is one of the more appealing characters in the film, bereft of likeable adults, who just want to conduct their games in the spirit of “The War of the Roses”.  The actor actually wrote a song for the film, according to the credits.
The film did register with me because of various situations that have occurred in my own life.  I insist on going on my own path, and not being dragged in to playing other people’s games and winding up in the middle of a situation like this.  No wonder “the straight world” sometimes has a bad reputation.
The site for the film is here.
I saw this at the AMC Shirlington on a Saturday afternoon in front of a respectably sized audience. People in Arlington seem to be interested in this movie.
Posted by Bill Boushka at 3:27 PM