Ingmar Bergman's "Persona": a near monologue with a touch of David Lynch, and plenty of existentialism 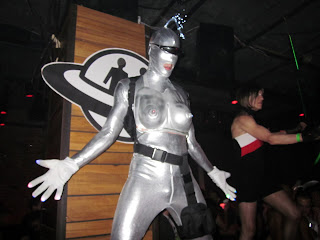 A friend recommended  Ingmar Bergman’s “Persona” (1967) from his blog, and I checked it out on Netflix.
And this little black and white film (from MGM), that seems like a play – even a monologue for the most part – gets into existential stuff, about the meaning of one’s “purpose” and one’s relationships.
A great actress has gone mute from some neurological shock, and a nurse moves in with her into a villa as a “live-in” to take care of her.  Caregivers say their job is to “love” the person cared for, but in this case the nurse (Bibi Andersson) finds herself becoming part of the actress (Liv Ullmann), as if some worldwide contraction of souls could take place.
The film has numerous gems (the DVD offers English dubbing) to quote or paraphrase:
“The constant gulf between what you are when with others and what you are when alone ….”
“You yaught me to smoke.”
“I was told I am a good listener – nobody has ever listened to me.”  That sounds like an instantiation of my pet phrase, “the privilege of being listened to.”
“I always wants a sister.”  I didn’t. But at one point my parents talked about adopting one.
“I become part of you.”
“Great artists have sympathy for other human being.”   What’s the most important effect of art: it’s performance or publication, or the social networking that should follow?  Hence, Facebook.
“Doctors say people like you can’t be gotten at.”
While most of the film hints at some lesbianism (this was the 60s, when “The Fox” and “Killing of Sister George” got made),  we also  learn  that the actress had, in a sense, “failed” at becoming a mother, and had "copped out" with an abortion  (and “that was that”).
The film has a bizarre prologue (and several interludes) reminiscent of David Lynch, including broken film reels (as a kind of encapsulation) and a nail going through a hand (crucifixion).
The DVD includes a featurette about the film,  “A Poem in Images”  directed by Greg Carson, and also interviews with both actresses.

Note: In the original posting, "Persona" was accidentally mistyped as "Personal" in the posting heading; the name of the posting when located directly will have the "l".  That is not really a problem!  (It's sometimes spelled as "Personae".)
Posted by Bill Boushka at 6:45 AM