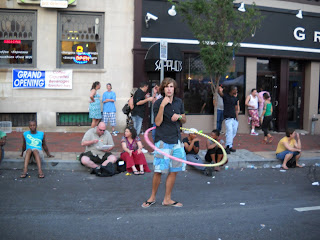 Anton Yelchin, the Russian born actor who looks a little grizzled for age 22, plays the same kind of kid (Charlie Brewster) in Craig Gillespie’s “Fright Night” as he did with the nerdy “Charlie Bartlett” in 2007.  He notices that a lot of kids are missing from his high school English class, but he doesn’t make as much of it as the even nerdier Adam (Will Denton) who pretty soon has him breaking into a neighbor’s tract Las Vegas house to see if the latter is a vampire.  The movie’s plot borrows from other films like “Rear Window” and even “Disturbia”, but it’s all pretty improbable in terms of character.  Yelchin’s teen character Charlie doesn’t seem as clearly drawn or even as clever as Kale (Shia LaBeouf) in “Disturbia”.
Colin Farrell seems like an improbable, overly muscled choice for the thirty-something vampire, Jerry, who otherwise lives as a yuppie bachelor, but enjoys accumulating victims (not a good message to send).   Maybe I’m acclimated to Brad Pitt and Christian Slater (“Interview with the Vampire: The Vampire Chronicles” [1992]).
The other characters are played by an appealing cast: Toni Collette is the nice single mom, David Tennant is the lanky British vampire slayer who has a regular act in a Vegas show, and both David Franco (brother of James) and Reid Ewing also appeal.
The setup seems other-worldly: the movie is set in a square mile tract of identical houses in the desert, isolated, almost as if it were someone’s model world. You expect to see a haboob sweep the place away; you don’t even need Anne Rice.
The film shows some dangerous ideas: Charlie learns how to use bump keys to pick locks from his cell phone surfing of mobile websites; and Jerry digs for a gas line to torch Charlie’s house, a horrifying notion.
There are some of the usual special effects, including some highway scenes reminiscent of “Jeeper’s Creepers”. But, the supernatural ideas are not all that original; a film like this really needs character differentiation to work.

The film is shot in 3-D in regular aspect ratio; I think wider would have been appropriate. The Vegas strip could give more a sense of place.  I love the place, but haven’t been there since 2000 (I stayed in the Luxor in 1997).  Movie-making is probably a necessary replacement industry given the area’s recent economic troubles.  Red Rock Canyon would be a great location for more films.  (IMDB says most of the film was shot around Albuquerque, NM.)
The film was produced and distributed as another collaboration between Touchstone (Disney) and Dreamworks (Paramount).   Yes, this is a remake of an 80’s film, which I don’t recall seeing when living in Dallas.
IMDB has an unusually thorough user review by Joe Marino, which I recommend.
Here is the official site from Dreamworks.
One other thing: Back around 1962, a friend actually wrote a college English term paper about vampires.
Posted by Bill Boushka at 2:02 PM