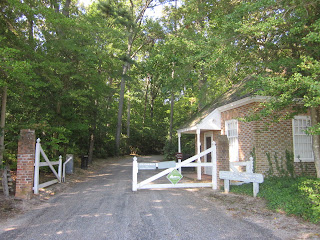 Recently, I’ve seen some movies about “parallel realities” and the 1987 Australian flick “Frenchman’s Farm” certainly fits in. It’s directed by Ron Way, and the DVD (oddly full screen) distributor is Substance or Magnum.
In Queensland, on a 1984 day where the mercury is over 120F, goes on a drive from her ranch, and her car overheats. When she gets out and tries to fix it, she enters a time warp, and wanders over to a farm looking for help. Before she witnesses a murder, there are copious signs that she has traveled back to the WWII years, before France was liberated.  Then she returns to the present. Pretty soon, she is enlisting boyfriend (David Reyne) into solving the crime. Weird stuff happens, as mainframe computers (the movie shows character display CICS screens as they were in the 80s) act like they have logic bombs keyed on leap year dates and other data seems intentionally corrupted by someone in the past, maybe in the days before computers had good security for access to production files.  (All this could happen if there were no guarantee that the source and load modules match,)
The movie goes into weird territory, link back to retrospects of the French Revolution and the guillotine, with a suggestion that her boyfriend was reincarnated from someone disposed during the Reign of Terror, maybe Robespierre himself.
The film mocks the style of film noir, with shades of Hitchcock, and a music score that varies from Baroque to noir to hip hop.
Mrparka’s DVD collection update on YouTube includes mention of this movie.
Posted by Bill Boushka at 5:15 PM