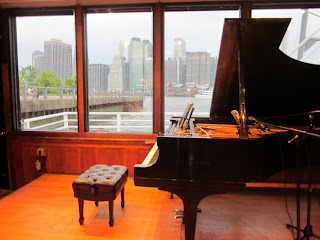 “De-Lovely” is a somewhat overlooked but thorough (125 minutes) musical biography of Cole Porter, played (mostly in flashback) by Kevin Kline. The 2004 MGM film is directed by Irwin Winkler.
Ashley Judd plays the sympathetic wife (of social convenience), Linda, who remains assertive while supporting his bisexuality, not seeing it as existential disloyalty. A critical confrontation in the film’s middle gives her a chance to tell him off.  Here are some lines:
“You’re music comes from your talent, not your behavior.
“I don’t think I want you to be discreet, but to be different.
“I have spoiled you, and so has the whole world, and for what. Only a little of your music."
Much of the film concerns his relationship with his male partner, played by John Barrowman.  Porter says openly that one person could not satisfy his need for adult love, and neither could one gender.
Porter would have a horse-riding accident that would change his life, and lead to amputation, after many surgeries. The actual riding accident (and stomping by the horse) is quite harrowing, and reminds one of a somewhat similar scene in “Gone with the Wind” with the loss of Scarlet’s daughter.
Practically every major song (most of all, “Anything Goes” – with its now obvious meaning) by Porter gets performed in the film.

The title of the song here ("You're the top") does sound like a pun, doesn't it.
Posted by Bill Boushka at 6:31 PM