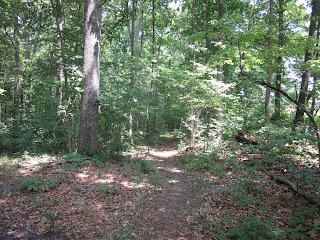 Back around 1982, a computer operator whom I worked with in Dallas told me of a short story he had written.  Some young people explore a camp of “mutants” in Lake Murray, Oklahoma and only one escapes, to be rescued and brought into an evangelical church and saved. Unbeknownst to them, the outside world has experienced a nuclear holocaust.
The little horror film “Albino Farm”, written and directed by Joe Anderson and Sean McEwen, follows this general outline, except that the setting is the Ozarks near Springfield, MO (where the Assemblies of God are headquartered).
After a backstory prologue, four college students (played by Nick Richey, Sunkrish Bala, Tammin Sursok and Alicia Lagano), supposedly with an assignment to write a research paper on local history, go into the ghost town of Shiloh, MO to pick up on rumors of a lost “Albino Farm”.  The DVD extras, in fact, discuss mention of such a place in the area from Civil War times.  Brian (Nick’s character) is especially daredevlish in tracking the place down.
This is one of those movies where you know that most of the appealing young people are going to “get it”. This is no exception.  The film seems like a sequential dream, with some religious clues (including a revival tent).  Pretty soon they are taken to the “farm”, much of which is inside a cave.
For some time, the movie deals with the "issue" of deformity.  (The script quotes a curious passage from Leviticus Chapter 21, which definitely would seem to contradict the spirit of the Gospels.)  One could take offense with it, especially when Brian is “teased” by one of the female mutants.  Yes, like Shutter Island, this was one of those places were “misfits” were housed away (and then bred).  But finally one female character will escape to “salvation”.
A tagline in the film is “We always welcome those in need.”
Here is the official site.
Posted by Bill Boushka at 5:35 AM