"The Wages of Fear" (generating "Sorcerer"): some old-fashioned movie making 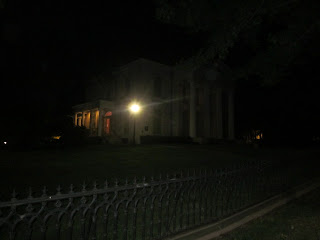 In 1977, I recall seeing a film by William Friedkin, from Universal and Paramount, “Sorcerer”, at a large theater on E 86th St in New York City.  Based on a novel by Georges Arnaud and starring Roy Scheider, it, with a lot of spectacle, related the story of outcasts hired by an oil company to transport crates of nitroglycerin through a Latin American jungle.  The title of the film refers to one of the trucks.
That movie sticks in my mind, but two years earlier I had seen another movie at the same theater, and when leaving, picked up a little magazine at a newsstand that would lead me to visit Dan Fry’s “Understanding” west of Phoenix, AZ.  That would start an episode of my life.  (“To Men of Earth” could make a good movie.) I don’t remember right now what that other movie was, but I remember the theater and the intersection.  I didn’t frequent the Upper East Side all that much when I lived in NYC.
Today, I watched the DVD of the original 1953 film “The Wages of Fear” (“La salaire de la peur”), directed by Henri Georges Clouzot, from Janus Films and now the Criterion Collection. Several men with difficult backgrounds are stranded in an isolated Latin American town. The film (147 min) slowly develops their histories; the first shot in the BW film is two insects, and the first words are “I hate mutts”.  Some hundreds of miles away, there is an oil field explosion. The Southern Oil Company (SOC) has one its managers hire the castoffs to drive nitroglycerine through the jungle. The men are told there are no safety devices and they have to do everything with their “arms and legs”.  One wonders about “exploitation” but this is 1953.  What ensues is a journey and battle for survival, with the truck getting stuck in various situations challenging physicality for the filmmaking itself.  The men fight each other yet develop almost homoerotic bonds.
At the end, Mario (Yves Montand), having survived the ordeal,  is driving his rig for pleasure when he misses a curve and crashes the rig. In the meantime, the Blue Danube is playing at a party back home. Did this scene inspire the use of the Blue Danube in the “2001: A Space Odyssey” movie?