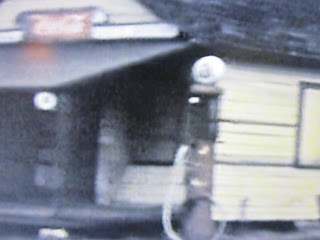 Jared Padalecki was named a presidential scholar when graduating from high school in Texas, but he immediately jumped his career in acting, most notably playing the likeable law student brother Sam in the series “Supernatural.”
In 2008, he played lead in a gentle Christmas film, "Thomas Kinkade's Christmas Cottage", “based on true events" back around 1977, that raises some old questions about family values, especially as they apply to those with “artistic” talents.  Jared plays Thomas Kinkade, an art student at Berkeley. He comes home to his mother  (Marica Gay Harden) and brother  (Aaron Ashmore, from Smallville) in the High Sierra town of Placerville for Christmas and finds her house falling down and her in danger of foreclosure.   Because of her pride, she doesn’t even want to tell her she was laid off. (Was the timing of this 2008 film a coincidence?)
Quickly Thom is faced with the question of how to use his painting skills – in art – to economically practical use to save his mother’s house.  Should he have to come back from school to support her?  Not if he can paint things that will sell the town’s Christmas message. But he doesn’t get to choose his own message, completely.
Old veteran Glen (Peter O’Toole), looking for a second trade wind in life, can play mentor.
The screenplay builds upon crises in a conventional way, as they teach in tearjerker class.  (Even a Christmas tree lighting in the Christmas Tree Capital of the world is a fiasco.  And then the pageant itself falls down.)   Maybe there’s a message: paint what other people want.
It's not about "how to paint" but "why to paint".  How would that apply to music composition?  (Debussy's "Claire de Lune" gets played a little too much here.)
The official site, from the real-life painter, is here. It's directed by Michael Campus.
Posted by Bill Boushka at 7:44 PM