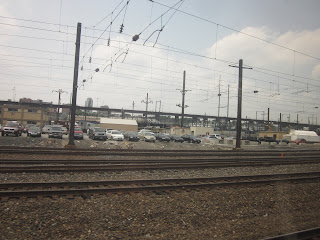 Who can complain about the idea of a movie about kids sitting around and talking about screenplay story structure, even in a steel town in Ohio’s Appalachia-end in 1979? (It might help if you threw coal strip mining into the mix.)  Well, these middle school kids make a vampire movie, called “The Case”, actually aired on the left side of the screen (2.35:1) during the credits. (Was this short really written and directed by kids, even for Paramount/Dreamworks?  One would hope so.)
But, while staging one scene, the kids witness a gigantic freight train wreck (which gets filmed in Super 8 accidentally), very well done (in the outer film story) and destructive with such unstoppable momentum.  (One of the more precocious kids (played by Courtney, below) notices, in the distance, a car being driven onto the racks just before the crash -- a deliberate sabotage that plays into the plot later.) That’s the setup of “Super 8” from sci-fi writer and director J.J.Abrams.  Pretty soon, goofy stuff happens – people and hardware getting snatched up from gas stations.  The Air Force is involved, and soon is setting up a wildfire and evacuating the town, actually filmed in Weirton. W Va.  (Weirton steel was a client of mine at work back in 1991; I’ve driven through the town and recognized the steel mill.)   Oh, yes, the government is covering up UFO landings and crashed saucers from the 50s. 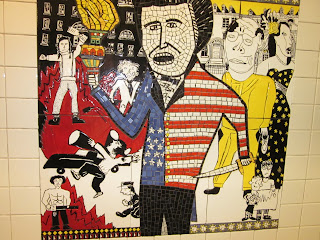 The movie turns into a ménage of “X Files” and “Goonies” (maybe even “I Am Number 4”, also about Ohio) perhaps and doesn’t know if it wants to be a comedy. The other idea, that a behemoth monster (pretty much out of Japanese horror but also some inspiration from “Alien”) can make a spaceship to go home out of junk, seems disconnected – but I like the diplomacy scene where the kids negotiate with the monster.
One problem for me was there really wasn't much of a connect from the layers of "reality" in the film.  By the way, at a nearby church here in Arlington, teenagers made a sci-fi short similar to the one here during their 30 Hour Fast to end world hunger.
With many young actors: Joel Courtney, Jessica Tuck, Ryan Lee, Zach Mills, Gabriel Basso, Riley Griffiths, Elle Fanning, and adult Kyle Chandler. The June 17, 2011 Entertainment Weekly has a story on the "real" kids.

Another interesting observation was the nature and capability of the camcorders (analogue Super 8, still popular with some indie filmmakers) available to filmmakers in 1979, when Executive Producer Steven Spieberg was at prime. The kids seem pretty good at using them.
Paramount’s official site is here.
The film should not be confuses with "8-1/2 MM" or "Se7en".
Pictures: No, not Ohio. NJ, and the NYC subway
Posted by Bill Boushka at 6:22 AM