"Peacock": Two characters for the price of one, Midwestern town family secrets, a bit of Psycho: all exposed by a train wreck (w/o a "super 8") 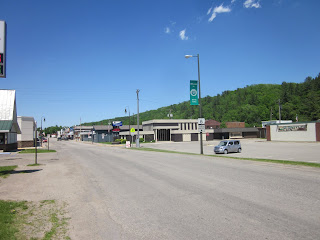 Cillian Murphy, as an actor, certainly can transform himself physically and bend genders; he already did that with “Breakfast on Pluto” and then seems virile enough in “Inception”.
But in “Peacock” he goes into altered states again, in an ironic, slow-paced thriller somewhat inspired by Alfred Hitchcock’s “Psycho”. This little film from Lionsgate (director Michael Lander) attracted my attention because a train wreck figures into the lot, instigating it – on the heels of my seeing “Super 8” and even “Atlas Shrugged”.  The film has a bizarre mix of story elements.
It is set in the flatland town of Peacock, NB, but was actually filmed around Boone, IA (a little of it in Minnesota – and I suspect it got some attention in Minneapolis, where I used to live, as well as in the Kansas City Jubilee festival circuit – it is very “Midwestern”).
Cillian Murphy (“28 Days Later”) plays reticent bank teller John Skillpa. But early on we learn that he also plays the “wife” Emma, when he shaves down and dresses up.   That “pre-spoiler” changes the focus of suspense in the movie, from internal to external elements. Nobody in town seems to notice – the smooth hands and wrists (in one scene later, he shaves an eyebrow) – not even that he and his “wife” never appear together.  He has “become his own man” (he even says “you’re not the boss of me”) after his mother died, leaving him to have to do things for himself, they say. But even that is somewhat questionable.
After the train wreck in his back yard (it doesn’t get shown in a lot of detail), the political folks want to have a fundraiser at his home. He has to set up a ruse to hide his own Tootsie-like other side.  But there are deeper secrets in his past, very dark ones, about his mother. This other woman Maggie (Ellen Page) shows up with a baby and keeps asking for money, and we learn she may have good reason to.
Cillian (on the DVD) describes the character’s problem as “dissociated personality disorder” (not schizophrenia or multiple personality disorder) as caused environmentally.  There is a “War of the Roses” within one person.  Eventually, John/Emma will resort to violence, something out of “Sling Blade”.
There is controversy over the ending, and the DVD offers an alternate ending, which is almost as abrupt and ambiguous.  There’s a touch of “Tree of Life” in this story, toward the end, too.
The DVD also explains the physical transformation, into softness, to create Emma – to have two completely separate people with one body. “Us ladies have to stick together, right?”
Other big stars appear: Susan Sarandon, Bill Pullman, Josh Lucas, Keith Carradine.
The official site is here.
Lander says he wrote the script when in a workshop sponsored by Fox Searchlight (which didn’t wind up being the studio to pick this film up).
Picture: (mine) western Wisconsin (Spring Valley).
Posted by Bill Boushka at 1:40 PM