"Midnight in Paris": Woody Allen offers time travel to screenwriter/novelist as a way to work out his karma 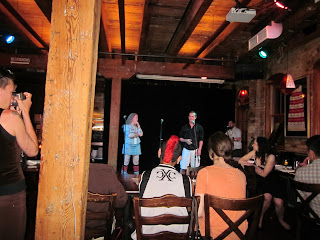 I suppose that it’s logical that Woody Allen (now 75) would think of some of the same plot devices that I have.  Even in a romantic comedy, when I would be dead serious with any sci-fi setup.
Yup, it’s time travel.  You get taken by angels, and find yourself living in an earlier era. You’re abducted periodically, and if they send a private eye after you, he gets sent back more than one generation, back to the time of the Three Musketeers, with no Milady.
That’s what happens in “Midnight in Paris”, or rather at midnight, whenever a particular aspiring writer takes his strolls in the City of Light, alone. He even gets to come back every morning, although others may not.  It’s rather like surviving the love trains at a disco.  And he gets to think and talk about the life and existential nature of a "writer" all the time, and still seem manly and romantic enough for a girl friend. He might even make for a good father some day. Or, if he isn't careful, he might lose her.
The film looks small, shot in digital video on a few streets in Paris, and then in some roaring 20s boudoirs where people smoke like chimneys.
Owen Wilson, who doesn’t have enough of the external trappings of manhood, plays a genre screenwriter Gil, traveling with his fiancee Inez, Rachel McAdams and her Republican tea party parents on business in Paris (sorry, it's all heterosexual). He wants to write the great novel set in a better time. So he gets what he wishes for, when he goes on midnight strolls. He meets The Thief of Always in a yellow model-T.  He even gets repeat visits, a chance to bring his paper manuscript (back into a time before thumb drives) so that Gertrude Stein (Kathy Bates) can read it without chopping off his feet.  He consorts with F. Scott FitzGerald, Pablo Picasso and Ernest Hemmingway. There’s enough here for plenty of English themes.
My own concept in a couple of movie scripts is that the protagonist gets “abducted” or perhaps goes through “transition” (death) and is taken to some kind of artificial world – maybe a synecdoche set up on Titan, or maybe a parallel universe, or maybe the innards of someone’s model railroad set (“Roadside America” as one of the Roadside Attractions), placed in an earlier time era, and encouraged to procreate so there will be children or progeny who can learn from his world of ideas and live in them.  (At least his life is still easier than a March of the Penguins.)  But, expanding on a concept in Woody Allen's film, the protagonist has the opportunity to experience being at different ages.
Sony’s official site for the film is here.
EFE International offers this interview with Woody Allen.
Posted by Bill Boushka at 7:46 PM