"Beginners": another LGBT take on how "the tree of life" really works 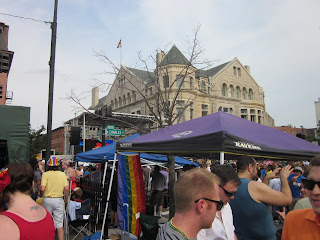 On the night that New York State legalized gay marriage, I saw this little film, which, in a manner different from “Judas Kiss”, is another “LGBT” take on “The Tree of Life”, this one actually more similar in style to the visual and spiritual epic from Fox a few weeks ago.  This time, the film is “Beginners”, and the title indeed suggests that life can take on a new beginning at any age.
Ewan McGreggor may be 40, but in the film he looks more like 28 or so, in the summer of life. He plays Oliver, a young, totally heterosexual graphic artist and writer who recalls the story of his father’s epic life.  (He's also developing an art project tracing the "history of sadness".) His father had announced (in 2003) at age 75 “I’m gay” after losing his wife after 44 years of marriage and raising Oliver.  The father Hal (Christopher Plummer) would die of lung cancer in four years, but he spends those years finding love and his own personal destiny; it's never too late for love!. Much of the film’s flashback content shows the loving personal care the son gave the father, as he deteriorates physically, but never mentally.  Goran Visnjic plays Andy, Hal’s lover (looking more youthful on film than on imdb), who explains why he is attracted to older men.  (The day that I “came out” for a second time, Feb. 18, 1973, and went to a “gay talk group” on the upper West Side on NYC, I remember someone’s giving a similar story and reason.)
Oliver explains in other flashbacks the early history of his father's life, how he knew he was gay as a teen, served in the military in WWII without incident (hence, another example countering the past military gay ban), and had a psychiatrist tell in in 1955 that homosexuality was a "disease".  His wife knew but said she could enthrall him, which she must have enough to have at least one son. The film does suggest some answers as to why homosexuality was seen as "such a big deal" in the 1950s and throughout much of the 60s, until the Civil Rights movement and then Stonewall (again, as I experienced in my own coming of age and William and Mary expulsion in 1961).  It seems as though everyone was supposed to "pay his dues" and raise a new generation. But of course, we know how that turned out to be a canard.
The him has some "other" beginnings, too. Oliver meets Anna (Melanie Laurent) and begins a romance, at one point visiting her apartment in NYC and not knowing she is in LA (his home). The intimate scenes don’t really live up to their promise.
And there is the wonderful dog -- pooch --, Arthur, whom Oliver takes over and "raises" after Hal dies.  The film is filled with subtitled and touching comments from the dog, which are more or less like what a five-year old child would say about the goings on.  (That is more or less the cognition of a social carnivore: street smarts and a certain kind of good memory, but no understanding of human abstract culture.)  “I understand 150 words but I don’t talk”.  The dog is constantly on camera, desperate to hang on to human attachment.  A cat wouldn’t have done that (but there’s another movie coming about a domineering cat, “The Future”). Remember Cleo, the talking dog, from the 50s sitcom "The People's Choice"?
The film, directed by Mike Mills, is from Olympus and Focus Features.
Here’s the official site.
Posted by Bill Boushka at 6:41 AM