"Au Pair, Kansas": family dramedy with some secrets, and with an important famil care practice explored 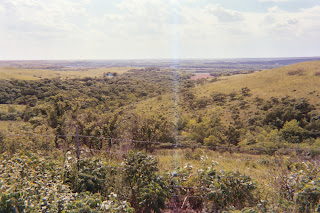 Midwestern film festivals have been treated to a domestic drama with some surprise LGBT twists, “Au Pair,  Kansas”, directed by physician-filmmaker J.T. O’Neal, filmed (in full 2.35:1) in the countryside near Salina, KS, in winter, with some snow and brown prairies (The ridge-like hills are larger than I expected).
An “au pair” is a domestic assistant hired, usually from overseas, to help raise the kids in a family and usually regarded as a family equal. (I can think of situations where this could be reversed, as a sequel for eldercare.)  In the film, Traci Lords plays Helen, recently widowed after her 40-something husband, a successful buffalo rancher and engineer, has died of melanoma (which is generally a bad scene). She hires soccer player Oddmund (Havard Lilleheie) from Norway to look after her 15 and 10 year old sons and help with the ranch.
The oldest, Atticus (named after Gregory Peck’s character in “To Kill a Mockingbird”, played by Spencer Daniels), is rapidly becoming a man and will celebrate his 16th birthday. He watches videotapes from the benevolent deceased father about what to expect.  Oddmund is a bit of a cut-up, and eventually gets in trouble after Atticus gets sick when he first tries to drink. His attempt to clean up the situation (literally) leads to a horrible but incorrect accusation. But there are more family secrets: Traci’s husband was bisexual, and may have married in order to have children. Slowly the community in a small Kansas town has to come to terms with difficult ideas.

Fortunately the county or town sheriff (Cher Ferreya) is level-headed enough (because of her own issues) to control the situation (she reminds me of the sheriff in “Smallville”).
Much of the film happens during the Christmas season, and the indoor scenes have spectacular interior Christmas decorations. 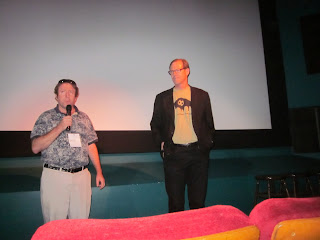 The writer and director gave a screenwriting workshop, and compared the practical issues for screenwriters in writing spec and shooting scripts in both conventional Hollywood and indie markets (Hollywood has a Third Party rule and “coverage” system: “Pass, Consider, Buy (almost never)”.  Cardinal rules: Keep it simple, and “Don’t Be Boring”.   He challenged the audience to remember how much dialog sticks to the ribs. Most of us remember "I am the king of the world" from "Titanic" and that's about it. Our visual cortex is much better at memory than our verbal.
The Wordpress site for the film is this. The tagline is, “He’s not gay, he’s European”.
First picture: Flint Hills in Kansas (mine), somewhat East of location of film.
Posted by Bill Boushka at 10:21 PM