"Too Big to Fail": HBO film presents a school of scoundrels 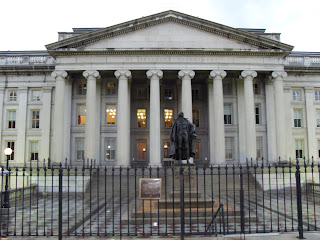 HBO’s long-awaited “Too Big to Fail” aired tonight, but it seems rather workmanlike, as docudrama, compared to Sony’s “Inside Job” last year.
The film has an all star cast, including William Hurt as the hidden Democrat Henry Paulson, Paul Giamatti (who else?) as Ben Bernanke, Billy Crudup as Timothy Geithner, Edward Asner as Warren Buffet, Bill Pullman (blond now, remember “Independence Day”), Dan Hedaya as Barney Frank, Matthew Modine (“And the Band Played On”) as John Thain, James Woods as Dick Fuld. It’s based on the book of this name by youngster reporter Andrew Ross Sorkin, written by Peter Gould, and directed by Curtis Hanson.


The story starts in the summer of 2008 with the gradual storm clouds brewing over Lehman, and moves to the takeover of Fannie and Freddie.  Soon AIG is in danger of running out of cash.
Most of us know the story of Black Sunday, September 14, 2008, when Lehman went down.  “They knew” it was falling apart a few days before.  I remember watching the breaking news that Sunday while blogging; Anderson Cooper had been in the wrong place, covering a Texas hurricane.
The movie tends to ride on silly epithets like “cash for trash” (or “pass the trash”) and becoming “un-Republican”, and “lecturing me on moral hazard” and “private sector solutions”.  Or, “We will remember anyone who is not helpful.” Nancy Pelosi, when Paulson bows, says, "I didn't know you were Catholic." In the scene where they explain who credit default swaps insured by AIG could bring down the entire financial system, someone asks "why wasn't it regulated?", the answer is "they were making too much money."
The film is followed by a short, “Opening the Vault on the Financial Crisis” where Andrew Ross Sorkin (who is more attractive than anyone in the feature – in fact, he’s cute) talks.  Hurt makes Paulson look physically hapless; in one scene, Paulson excuses himself to throw up.
The Monday morning meeting of the bank CEO’s in early October, where TARP is announced, is better done.
In a perverse way, I may have, in the end, benefitted from the crisis. I might be in much worse shape had it not happened.  I don’t mind admitting it. I won’t give details here. This is all in spite of the fact that I had some CDS's in my mutual funds.
HBO’s website for the film is here.
Posted by Bill Boushka at 8:49 PM