"There Be Dragons": "real life" makes "real men" take sides, until they have faith 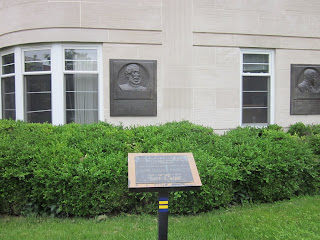 Roger Ebert often tells us that film has the ability to take us into an unfamiliar world and present and develop a problem through telling a story.
Probably not that many of us know the history of the Spanish Civil War in the 1930s, but Roland Jaffe puts together the layered elements of his story to examine the elements of faith, forgiveness, and loyalty, in the two-hour  epic film “There Be Dragons”.  I love the “subjunctive mood” in the name of the film.  “Every saint has a past, every sinner has a future” (Oscar Wilde).
A young journalist Robert (Dougray Scott) has a contract to write a book about a sainted priest Jose Maria Escriva, and contacts his ailing father in Madrid about the project. His father Manolo at first resists, but then beckons him with a letter that tells him the story of the frayed friendship between the father (played by Wes Bentley [remember him in “American Beauty”] as a young man, and Jose Maria (played by Charlie Cox). The relationship between the two men would build to a nearly tragic climax.
The animated opening of the film (with clever mapwork) clearly (and deliberately) sets up the historical context: the political and social situation in Spain forced everyone to “take sides” and join one Army or the other – and yet it seems as if socially the two sides (Communists and Fascists, basically) have the same values – authoritarianism.  Manolo at one point says his greatest high in life was to belong to an Army.  Jose Maria has embraced the teachings of his own upbringing, that the worst sin of all is to refuse to forgive.  Charlie Cox’s performance is always gentle and compassionate, with a slight hint that he might be gay.  His own father has asked him why he doesn’t want to have his own family.  But Jose Maria still shows the “paternity,” in a psychological sense, that the Vatican says is necessarily part of the priestly vocation. (It’s interesting, by contrast, that Manolo admits to his journalist son that he wasn’t a very good father.) Reviewers make a lot of Jose Maria’s founding  of Opus Dei, but his characterization of it is usually low-keyed, as a kind of family of faith. (There was one minor scene of self-flagellation, often reported of the group.)
The film moves back and forth in time (often framing the time transitions), telling the story of the fractured friendship between Manolo and Jose Maria, to be overtaken by Manolo’s own (heterosexual) romantic interests with women fighting in the war, leading to other deadly “conflicts of interest”.  The film stays in PG-13 territory and plays down the idea of romance or sexuality, as if it could be plugged in from any direction; the bigger issue is how you fit into your larger world around you, which may drag you into its causes.   Manolo sees this as just “real life” which he says his “friend” Jose Maria deliberately escaped.
There is a lot of CGI work in recreating war-torn Spain in the 1930s (with bizarre looking tanks and planes).  I didn’t realize it snows in Spain – it definitely does.  The film was actually shot in Argentina and Spain.  It stays in English, since the cast hired American and English actors (as well as Spanish).  It might well have been made in Spanish.  The scenes in the Madrid hospital lobbies present a sci-fi-looking whiteness. The film stresses the contrast between opulent modern Madrid and its past.
The film is distributed by Samuel Goldwyn.  No, this one doesn’t come from Sony Pictures Classics or Roadside Attractions, although it very well could have.  But it seems as though “independent film” (as AMC labels it) is getting bigger than conventional Hollywood. Call it movies for grownups.
I saw this at the AMC  Shirlington, the early show on a Saturday night, in its second week, before a small crowd.
The website for the film is this.
Rome Reports has a YouTube video on the presentation of the film to the Vatican.
Posted by Bill Boushka at 8:31 PM