Lars von Trier opens his mouth and gets booted out of Cannes, but his film doesn't; remembering "Dancer in the Dark", "Breaking the Waves" 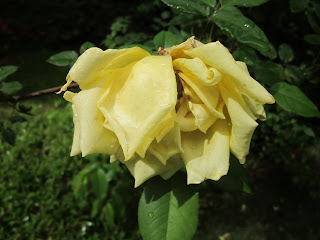 Apparently, if you say the wrong things, you can be ejected from a film festival, even if your film stays. So it is with Lars Von Trier (with “Melancholia” at Cannes). Here’s a story about the remarks.  Roger Ebert weighed in on his own blog here.  As far as the official book, here’s a basic story on Yahoo!
While Von Trier is well known for his Dogme technique of filmmaking, many of his bigger films are indeed in Cinemascope and use music a lot.
“Dogville” and “Manderlay” are filmed entirely on sound stages where the movie sets are like board games.

One of the most bizarre films is “Dancer in the Dark” (2000), ["Dancer", not "Dancing"] where Selma (Bjork) emigrates to try to earn money for an operation to save her and her son’s sight – and she love’s dancing. An accusation of stealing leads to a tragic but bizarre ending on death row, complete with music (like “I Want to Live”, Robert Wise, UA, 1958).   NY composer and pianist Timo Andres (“Shy and Mighty” and “It Takes a Long Time to Become a Good Composer” – it indeed does!) has an interesting detailed perspective on this film (with reply) here.
Another epic  is “Breaking the Waves” (1996). In Britain, Bess (Emily Watson) takes the marriage vows and then her husband is gravely injured on an oil rig accident. She seeks “satisfaction” with all kinds of proxies, until she comes to an end “more” tragic than her jilted husband.  The film is in seven named chapters, almost like a stitched TV miniseries, a kind of “Event”. The script makes a clever and existential reference to the Biblical "Parable of the Talents" with its paradox at one point.
(Sometimes the "Von" in his name is spelled "Van".)
Posted by Bill Boushka at 8:47 PM