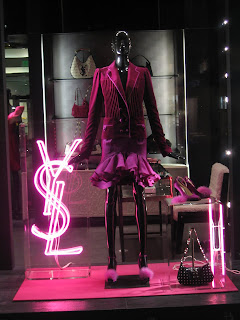 It’s pretty impressive when someone can make his own initials into a worldwide brand for products that give thousands jobs, but that’s the story behind French design Yves Saint-Laurent, as told in a story posthumously (YSL lived 1936-2008) by his lifetime lover Pierre Berge, in the documentary “L’Amour fou” from director Pierre Thorreton, and IFC Films, Sundance Selects, and Sophie Dulac.
The film focuses on their personal art collection, which filled several homes, and much of it is driven by the auction of the pieces, apparently at the Louvre.  Their collecting art reminds me of my own collection of classical records and then CD’s over the years.  My father once had said, back around 1962 or so, “you’re married to your records.”
The film has a lot of older backfootage, some in black and white, which contrasts with the opulence of their homes, in Normandy, Paris, and particularly Marrakech, Morocco.
They broke up once, at mid-life, when YSL was having his bouts with substance abuse.  Pierre , who talks very dispassionately, just got up and went to a ritzy hotel.  The younger YSL, in BW footage, looks vigorous, if just a but foppish and not too virile.
The film focuses on their homes, their collections and their relationship (up to a point), but not so much on YSL fashions; this was not like "The September Issue".
The YSL brand actually refers to the "fashion house" that Yves and Pierre founded together, and is still very strong today.
Here is an official site for the film (link)
I saw it at the late Saturday night show at Landmark E Street, and the attendance was disappointing, as it was shown in the largest auditorium, expecting possible sellouts.
Wikipedia attribution link for Beverly Hills picture of YSL storefront, pd.
Posted by Bill Boushka at 11:56 AM