"The Hitcher": action "thriller" races away from its own moral message 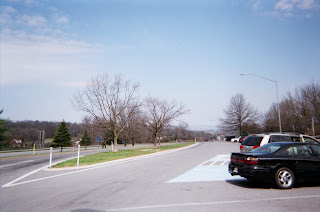 One of the biggest arguments for social interdependence (and “needing God”) comes from the possibility that “evil” can make bad things happen to good people if “Evil” is determined enough to target them.
That seems to be the point of a 2007 horror B-film “The Hitcher” from Rogue Pictures and Michael Bay’s production company Platinum Dunes, directed by Dave Meyers. The movie, though, gets carried away by its own hyper-activity. “That’s entertainment.”
When  Jim and Grace (Zachary Knighton and Sophia Bush) are driving in the desert to spring break, they miss hitting a man (“The Hitcher”, Ryder, played by an Sean Bean) standing in the road (reminds one of “Jeeper’s Creepers”).  Later, the meet Ryder at a convenience store and Ryder asks for a ride, as a kind of moral debt for a near hit-and-run. So much for the self-protective adage, "never pick up a hitchhiker".
The ensuing scramble is more complicated than could be productively summarized in a review, but the movie piles up an amazing amount of action and bad karma in 84 minutes.
The “Kids” get arrested for when another family is slain on the highway by Ryder, but escape when Ryder attacks the sheriff’s office.  But they will get arrested again.  The amount of situational manipulation in the shooting script must be unprecedented.
Best line: “We gotta go, he might come back.”
The film has an embedded shot from Alfred Hitchcock’s 1963 classic “The Birds”.
Before the end, the film pulls some inspiration from the “Saw” franchise.
The film was shot in Taylor, TX (NE of Austin) and in the deserts west of Santa Fe, NM.
Picture: Rest stop on I-70 entering PA from MD. Don't pick up hitchers there.
Posted by Bill Boushka at 8:27 PM