"The Double Hour": Be wary of whom you meet at speed dating (especially if your boss is wealth) 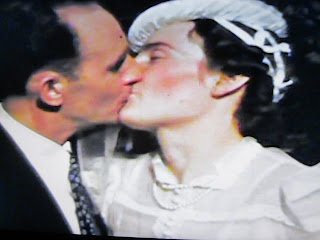 When I was attending a screenwriting workshop in Minneapolis in 2003, another young man had a script called something “I Hate Speed Dating”.  But all the sudden (actually it took two years for Samuel Goldwyn to distribute it), we have a romantic thriller from Italy, director Giuseppe Capotondi, with a particular premise.  Be careful about whom you meet, particularly at speed dating, especially the last round (not the same as the last round of a blitz chess tournament).  Be careful if you tend to wind up as a target. Not a nice message.
The title “The Double Hour” or “La doppia ora”, comes from a myth that you can make a wish when your watch shows a time where the hours and minutes are the same; e.g., 08:20 PM is 2020. That’s a little bit peripheral to what happens, for bad things happen from the dating wish.
The relationship is between ex-cop Guido (Filippo Timi) and opportunistic Balkan chambermaid Sonia (Kseniya Rappoport). Guido is a security guard for an estate for a wealthy Turin businessman, and when he takes Sonia there for a getaway, they are attacked by a well-organized robbery and hit, complete with moving vans.  What follows gets complicated. Sonia moves in and out of different states of reality, sometimes believing that Guido is gone – only to find that her delusions are part of a medically induced coma. There are more surprises, but Sonia’s behavior gives plenty of clues.  Why does she need to learn Spanish, and want to go to South America? Less clear is what Guido had done to draw the wrong attention to himself; it’s probably what his boss had done.
The thriller’s premise is interesting to the point that it says that ordinary people walk into things just advancing their own self-interest (as with the character Sean in NBC’s “The Event”, except that Sean will learn he isn’t so ordinary after all). There is talk of an English language version, just as with the “dragon tattoo” films.
Samuel Goldwyn’s official site doesn’t have a film-specific URL, but changes as each new film becomes current. I don’t recommend that practice.
I saw this Memorial Day afternoon at the AMC Shirlington in Arlington, with a small crowd that seemed to respond to the plotting of the movie.
Picture: my own parents, from their 1940 wedding. There was no speed dating in their era.
Posted by Bill Boushka at 5:39 PM