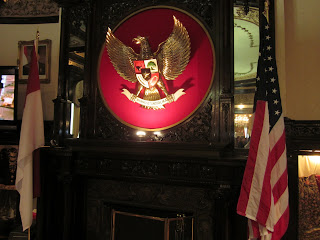 I had seen an early version of “Blogumentary” by Chuck Olsen, at the Bryant Lake Bowl (site) in Minneapolis, in August 2003,  the day before I started my move back to Minneapolis.
He starts out by saying “I am the media.”
He started his blog in September, 2002.
The film mentions the Diary of Samuel Pepys in 1660 as maybe the first virtual blog (site).
Rebecca Blood appears early to describe early bloggers.  Push Button publishing started Blogger as far back as 1999.
An early blogger followed the aftermath of Sept. 11, 2001 with his “buzzmachine.”
The film says that Trent Lott was the Internet’s first “scalp”.  It explores the bottom-up pressure on the mainstream media, which the film sees as largely controlled by liberals and the Left. It became clear early on that blogs could become an effective tool for communicating dissent before there was traditional solidarity.
But Rebecca Blood makes the comment that there is a big difference between personal blogs and formal journalism, in terms of the expectations of objectivity and in the idea that a blog should express the “bias” of the blogger.
The film is a featured video on YouTube, link here, and runs 65 minutes.
At the partial showing in Minneapolis, the director did talk about how some bloggers had been fired. At the time, Heather Armstrong was just getting started with her famous mommy blog after being “dooced”.
The film says that 56% of bloggers are women.
There’s a little sleuth story at the end that reminds one of “Catfish”, a supposed female blogger tracked down who turns out to be a man.
Of course, the significance of the blogging environment became a more subtle topic after social media exploded, first Myspace and then Facebook, which practically rules the world today.
See also the “BillBoushka” blog June 21, 2008.
Chuck’s site on Blogger is here.
The site for the film (no embed offered) is here.

The "Blogumentary.org" site now seems to be a Japanese site.
Posted by Bill Boushka at 9:10 PM