"Bedways": A rogue filmmaker in Berlin sets up two "friends" in an "audition" for "real life" 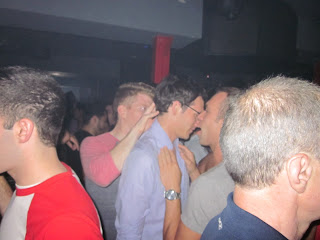 Actors do go through a lot (as Ashton Kutcher specifically noted last year), and one risk is that a filmmaker might be more interested in setting them up for a voyeuristic exercise than in actually making a film.
Such is the premise of Rolf Peter Kahl’s (also called RP Kahl) short feature (74 min) “Bedways”, a closing night feature at the Berlin International  Film Festival last year and due from Strand Releasing in late June, 2011. (I received a free promo; the production company in Germany is Mogador.)
Nina (Miriam Mayet) invites two “friends”, Marie (Lana Cooper) and Hans Alexander (Matthias Faust) to her bare bones, grungy apartment in the “Mitte” secton of Berlin to “audition” for this film which it becomes clear might never be made. And indeed the actors have to go for it, and make the experience real, which is what Nina is after.
Eventually, Nina sets up a gawk section in a basement of what looks like the Connection Disco (from what I remember from my 1999 visit), and straight life and gay life seem to look a lot alike here.
There was a short film, “Casting Call”, in the DC 48 Hour Film Festival, with a similar pretext (see May 26).

The film is technically not rated but very explicit.
Here is the official original site.
Picture (mine, not from film): A much happier scene in a disco.

This review is based on a complimentary copy sent by the distributor.
Posted by Bill Boushka at 6:42 PM