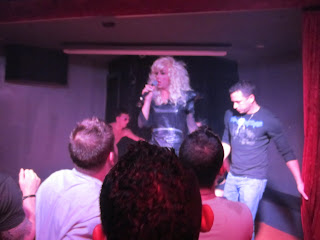 Someone sent me a link to a webpage “The 10 Best Low Budget Films of All Time”, here.
I’ve reviewed #1 (“Following”, Christopher Nolan, Sept. 8, 2010) and #4, the Dogme-shot “Paranormal Activity” here (Oct. 27, 2009).
On “DoAskDoTell” I’ve reviewed  #2 “Primer", #3, “Eraserhead” (David Lynch), #6 “The Blair Witch Project”, #7, Morgan Spurlock's "Super Size Me", and #10, “Halloween” (the original).  There is an even more bizarre song-and-dance scene in Eraserhead later from “heaven” in a speakeasy.
“Primer”  deserves extra mention. Made for about $7000 around Dallas in 2003 or 2004 by a virile-looking software engineer named David Carruth, it tells the story of how some amateur scientists stumble on time travel, with a resulting interesting experiment.  The film looks slick and got distributed by New Line on DVD.  It begins with well dressed Reagan-rich Dallas yuppies at a house party, and sucks you in to a story that becomes credible.  For one thing, everybody at the party understood object-oriented systems.  This one is well worth rental or purchase for those who haven't seen it.
I saw “The Blair Witch Project” (Artisan) in 1999 at the Uptown Theater in Minneapolis; I bought the ticket early and stood right behind Josh Hartnett in the line to get in.  That day, when I bought the ticket, the theater owner recognized me for my “Do Ask Do Tell” book, because my Hamline University lecture had aired on a Minneapolis cable program about libertarianism.  I’ve also visited the Catoctin Mountain area, not too far from Brunswick, MD, where it was filmed, many times.
Morgan Spurlock’s work is familiar now, but the changes to his bod on a MacDonald’s diet (he throws up on camera once and ages a few years in just thirty days) were truly alarming. I hope they were reversible,
As for "Halloween", yes, they were doomed (they might as well have lived on Roanoke Island), and Betsy Palmer wields a powerful ax.
Posted by Bill Boushka at 7:52 PM