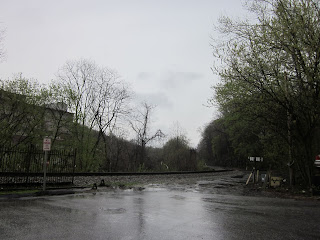 When I rented the Australian thriller “Noise”, directed by Matthew Saville,  I wondered if this would make a good comparison to “Source Code” (see April 1 on the “Disaster Movies” blog).  What I found was “typical” Aussie film: indirect, subtle, venturing into side elements, but in one respect more like an Alfred Hitchcock film than the recent opus from Quebec.
The film opens with a horrific scene: the aftermath of a massacre on a suburban commuter (or subway) train in Melbourne, Victoria. The lighting and camera angles make the train look like it’s on another planet (like in John Carpenter’s “Ghosts of Mars”).  A young woman Lavinia (Maia Thomas) has witnessed it’s aftermath when boarding the train, is in panic, and is handcuffed.  In the aftermath, however, she will meet up with a young policeman Graham McGahan (Brendan Cowell), who has been reassigned because of distractions of idiopathic tinnitus (which could have been explained maybe by sensitivity to gunfire).  The noise here becomes like vertigo in that famous director’s 1958 film.  When it overtakes him, all other sound is muffled out. The film recreates it frighteningly.
There’s been another slaying in McGahan’s district (shown in a newscast). When Lavinia finds threats on a van McGahan is supposed to be guarding, the clues link up (even diabetes figures into the story). But the movie then proceeds toward a horrific climax (except for the beginning and end, this is a “quiet” film); afterward, the closing credits will start with no music, making us wonder about the end of all experience.  The climax of the film skillfully uses the “summertime” Christmas season in Australia.
I developed some right ear tinnitus myself in the Army right after “coaching” on the rifle range in Basic. The blast deflector on the M-14 protects the marksman but not his neighbor.
Film Movement’s site for the movie
The DVD includes a short film “Motorcycle”, from Thailand, by Aditya Assarat. In this wired age, a village in rual Thailand has only one pay phone. An old man gets a call that his son has died in a motorcycle accident, and the man wants him brought back. The film is full-screen and grainy, with credits in Thai script, which may not look familiar.
Wednesday, April 13, I also saw the short “Society in Motion” at the B&O Museum in Baltimore, a video with contest-winning model trains, at least one of which would house the “Ghosts of Mars”.
Posted by Bill Boushka at 5:33 AM