"No Greater Love": can a marriage abandoned 10 years ago be saved after all? 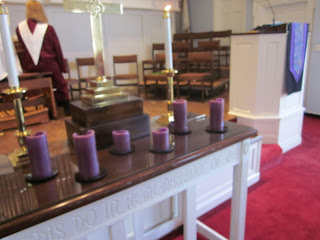 “Christian movies” seem like a genre of their own, because they do seem to stylize themselves around an agenda. That seems true of such films now distributed by major Hollywood companies. You can always identify them.
Such is the case with “No Greater Love”, from Lionsgate and Carmel Entertainment, and Brian Silverman. But the situations posed in the film are compelling enough for a more “neutral” style.
Jeff Baker (Anthony Tyler Quinn) writes and directs commercials for major corporate clients, but has to fight hard to get business. His creativity is driven by the market demands of others, to be sure. With a wife Heather (Danielle Bisutti) and baby Ethan (later, Aaron Sanders), the “disruptions” of the job are too much for their family. As the film opens, they have a fight. Heather leaves him (but never divorces), to raise Ethan as a single dad.
Years later, after he has dated another woman, he hears she is still around, and still has to wonder about mistaken identity. But indeed, they meet again, and deal with their relationship again.
Heather has been born again, and that could present a complication, unless Jeff follows suit.  Then the film is in the territory of acceptance of a larger purpose (assigned by a Diety) as the only way to achieve the stability of intense emotion that marriage seems to require.  For “social conservatives” who wonder why marriage is in decline, this film may be saying that it is because it demands so much.
The long-running syndicated series "Can this Marriage Be Saved" from Ladies Home Journal takes on real meaning here.
Toward the end, the film uses flashbacks of the earlier “fight” scenes, showing them in effective sepia to make the context clear. The film is shot in full 2.35:1.
The official site is here. This was called “The New Faith and Marriage Move of 2010”.
The familiar song "Here I Am" plays during the credits.
Posted by Bill Boushka at 8:45 PM