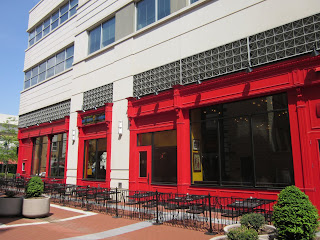 Well, has Morgan Spurlock made the ultimate meta-movie, the “Inception” of documentary?  That’s “The Greatest Movie Ever Sold”?  Or is the official title “POM Wonderful Presents the Greatest Movie Ever Sold”? (which is how AMC Theaters sells it.)  The "O" in POM is a heart graphic (like "I Heart Huckabees").
Pom may be the most visible corporate sponsor Morgan gets in this exercise in getting corporate sponsors to sign on to a movie (a Candide-like “satire”) about “product placement”, showing the process of finding corporate sponsors to help fund a movie by advertising their products in it. 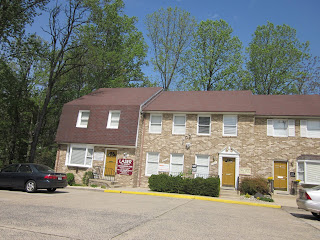 At first, nobody wants to do it. But Morgan is a pretty effective salesman, and son he has some clients like Jet Blue and Merrell shoes, Sheetz convenience stores (I didn't know they were headquartered in Pennsylvania, but I stop at them all the time on the road), and finally, POM Wonderful (link), the lead sponsor, with beverages based on pomegranate juice (and no competitor can match it for content based on this one "fruit").  Spurlock winds up with contracts requiring certain volumes in ticket and DVD sales, certain numbers of web impressions, etc.  Sound familiar?
Ralph Nader may be the most visible character in the film besides Morgan himself, who carries things with a degree of charisma.
Of course, in the world of public companies, brand is everything.  The board room scenes are a bit educational. The whole movie reminded me of episodes from Donald Trump's "The Apprentice".  Trump is not one of the sponsors, but I wonder how Spurlock would do on "Celebrity Apprentice" or if he has been on it.  Spurlock certainly gets results from his efforts.  He looks lean and marked (by all the "product placements", but fortunately no tattoos or body art), and recovered from "Super Size Me".  There's one bathtub intimacy scene, reminding one of the conclusion of "Where in the World Is Osama bin Laden"?
What’s scary, of course, is what this means for someone who would like to make a movie.  Some of the clients complain up front that Morgan Spurlock is already too “controversial”.  Do corporate coffers have much effect on the artistic content of movies that get bankrolled?

The sequence in Sao Paolo, Brazil is interesting (especially visually): the city has banned all commercial billboards from buildings and transportation.  Businesses develop customers by Internet or "word of mouth".

The music score takes after "Social Network" by using Grieg's Peer Gynt, "In the Hall of the Mountain King", and also uses a lot of music from Bizet's "Carmen", as well as the "scherzo" from Beethoven's Ninth.
Here’s the official site.
The film was produced by Snoot Entertainment and Warrior Poets, and has theatrical distribution  by Sony Pictures Classics.
By the way, AMC Theaters gets its own ad, of an extraterrestrial outdoor movie theater, in just before the movie starts. It's the best commercial of the day.
Pictures: No, none of these were sponsors of Spurlock’s film.  I would hate to be the actor posing for laser epilation services.