"The Conspirator": the parallels with the post 9/11 world are all too clear, even to "conservatives" 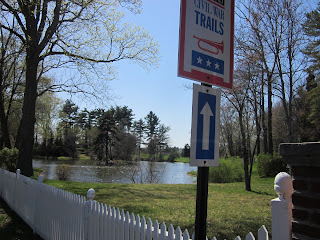 Lionsgate, Roadside Attractions and The American Film Company have backed Robert Redford to produce “The Conspirator”, a thoughtful, if neo-conservative, look at our ideas of justice in the time of common peril.  Note that the film came out the same weekend as “Atlas Shrugged” (yesterday). Coincidence?  It's the biggest "indie" film about the Civil War since "Cold Mountain".
Mary Surratt (Robin Wright Penn) was the only woman charged in the plot to assassinate Abraham Lincoln.  Former Union soldier Frederick Aiken (James McAvoy) is hired to “do his job” as a lawyer and defender her. His relationship with her seems adversarial for a “defense” trial lawyer, and only in time does he come around to ideals about American justice.
The film makes obvious parallels to our post-9/11 world. She is tried by a military tribunal, and Aiken is unable ultimately to prevail with habeas corpus.  The script talks about the danger to the nation from poisoned water and planted yellow fever – sound familiar?  Public sentiment runs very much against her.


She first says he was left with debt by a drunken husband when he died, and rented her rooms to make ends meet, and did not concern herself with their activities. That turns out not to be completely true. Her son (Johnny Simmons) seems to be unconcerned that his mother could go for his activities.
The movie has other interesting performances, by Kevin Kline, Danny Huston, and Jonathan Groff (from “12:30”).
Here is the official site.
Much of the film was shot in the Savannah, GA area  (“Midnight in the Garden of Good and Evil”).
Posted by Bill Boushka at 1:08 PM