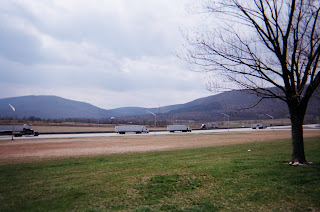 On Earth Day weekend, Disney Nature released “African Cats”, by Alastair Fothergill and Keith Scholey. Filmed in Kenya in the Masai park. Samuel L. Jackson narrates.
The film focuses most of all on two mothers: a lioness (Layla) raising one cub, and a single mom cheetah(Sita) raising several (but losing a couple to hyenas).
The lioness is already getting old and lives in a pride headed by an old lion king Fang, sheltered by a moat river moat. During the dry season, a rival pride (headed by a younger king “Kali” with more sons, rather like Saddam Hussein or Gadhafy’s sons, it seems)  from the north will invade and try to make “lebensraum” and take over the right to breed with the lionesses, ultimately threatening the old lioness and her daughter.
The film shows that lion politics is a bit like human, and individual animals have real personalities (just as all carnivores do, including pet dogs and cats).  Later the cheetahs play with a serval, which is a smaller wild cat similar to the domestic cat.  It’s particularly important that the male “protect” the pride from threats, both from alien animals (like one scene repelling a crocodile), and other prides. Actually, some of the scenes involving male lion behavior give us some insight into human bullying. Layla's plight is noted: a lion pride will not allow an older lioness who can not carry her weight with the hunting to remain in the group; this is a kind of authoritarian Maoist socialism that cuts both ways.

There are points where the lions and cheetahs face off; and young cheetahs have to learn that lions live in prides. The freedom of standing alone has its drawbacks for Sita; she has to leave her cubs alone when she hunts, risking not Child Protective Services but real predators.

I still wonder how these cats learn to accept the presence of human filmmakers. Although wild animals, they have rich lives, and seem very self-aware, with so many distinct personalities. You feel like Sita could live in your home. Viewers might want to check out the 2005 South African film "Duma" (Carroll Ballard) about a cheetah raised in a human home.
I saw it at Regal in Arlington with digital projection; regular aspect but stunning scenery, with is mostly arid, but with violent thunderstorms.
Here’s Disney’s site for the film.

Some of the revenue for the film goes to Save the Savanna, link.

Remember Disney's "The Living Desert" and "Vanishing Prairie" with Winston Hibler back in the 1950s?
Posted by Bill Boushka at 7:25 PM