"A Taste of Honey" airs on TCM; gay character in 1960 Britain presented with great discretion 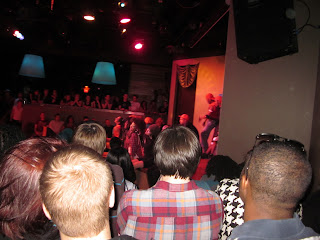 On March 10, 2011, Turner Classic Movies aired the 1961 comedy-drama “A Taste of Honey”, set in northern England (Manchester), directed by Tony Richardson.   Dora Bryan plays Helen, a working class girl who one day wanders onto a merchant ship, has a minor injury, and meets a black sailor Jimmy (Paul Danquah).  He gives her first aid for her injury, and they become intimate. In time, through comic sequences, we learn she is pregnant. But then Geoffrey (Murray Melvin) comes into her shoe store one day, and starts befriending her, learning about the baby.  Suddenly, it’s Geoffrey who wants to play family and daddy for the baby. We learn through some indirect dialogue that Geoffrey, who is shy but quite natty and appealing, would have been incapable of creating the baby, which in the context of the world of 1960 implied that he is gay. That’s a rather questionable way to reason. But Geoffrey still thinks he needs his own family to make himself legitimate. It's a pre-twist on a concept that Hollywood would take up later with films like "Raising Helen".
It was a bit daring in 1960 to take up the subject of homosexuality, so it was always handled “by implication”.
The black and white photography shows working class Britain as pretty grimy, almost in Dickens fashion. There are some interesting dance scenes showing "The Twist", popular at the time (and it would throw people's backs out).
The film was an “indie” treasure from early years, produced by Woodfall Film, distributed by Continental to theaters in 1961.  Netflix has the film under the “Save” category. Would Strand pick this one up for a DVD release?
Posted by Bill Boushka at 7:48 AM