"The Taqwacores": The birth of "Punk Islam" 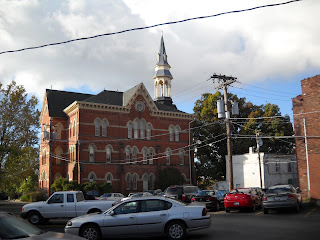 Can one be Muslim and liberal, participate in the punk scene, drink a little, play around, maybe even be gay?
That’s a premise of a new film by Eyad Zahra, “The Taqwacores”, available from Strand Releasing April 5 (I have a review copy); production company is Rumani films. It was an official election from the Sundance Film Festival (2010).
The film was shot in Cleveland,  but the book (by Michael Muhmmad Knight) is set in Buffalo, and was originally self-published and handed out free from Kinkos copies.
Yusef, a first generation Pakastani-American and an engineering student, moves into the “house” with some punk rockers who practice both forms (Shiite and Sunni) of Islam from several countries.  Yusef (Bobby Haderi), good looking and wholesome in a more “conservative” sense and not as obviously “Muslim” publicly,  is serious about his life, and wants to reconcile Islam with democratic and liberal values that he otherwise believes.  He has to keep his head above the clouds as others in the house “tempt” him, but in time he has to loosen up, especially about sexuality.   The other characters oscillate between prayers, rock punk sessions and other experiments, leading to a tragedy. Yusef must go on.
The film is shot (1.85:1) in sepia colors, and looks sharp on an HD TV with a BluRay player even though the DVD is standard.  Some of the climactic scenes are shot effectively in black and white.
The official website (for “The birth of Punk Islam) is here.
Picture: (mine), in Oberlin, Ohio, 35 miles W of Cleveland.

This review is based on a complimentary copy sent by the distributor.
Posted by Bill Boushka at 7:34 AM