"Rogue Trader" (1999) anticipates the Madoff Scandal, is made in the same style as "Social Network" 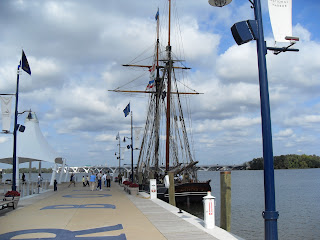 The 1999 Miramax film “Rogue Trader”, directed by James Dearden, makes for interesting viewing today in light of the 2008 financial collapse, as well as the Bernie Madoff scandal.  The film chronicles, with some humor, the story of Nick Leeson (Ewan McGregor), whose activities brought down Barings Bank in 1995.  The bank sent him to Jakarta to work on an operations problem. He meets and marries Lisa (Anna Friel) and sells the bank on a job in Singapore setting up futures trading.  He even tells people he isn’t selling products or services, but just “numbers”, relative to time.  The movie makes the trading floors garish and colorful, both with the sartorial tastes of the workers, and even the mid 1990s computer screens (probably mainframe CICS).
Leeson starts to get anxious as his scheme unravels; in one scene, he throws up, and in another, he imagines his business partners vomiting simultaneously at a corporate dinner when he unleashes bad news.  It reminds you of what happened to George Bush Sr. in 1992 on a trip to Japan.
In the end, he goes to prison in Singapore, and says he never traded illegally, by his own frame of reference. He would be let out early for colon cancer, from which he would recover.
The style of the film anticipates that of “The Social Network” as it makes a lot of subtle social interactions and the use of computers and numbers and other abstractions.
The film uses locations in Singapore, Jakarta, and even Kuala Lumpur quite effectively.
Nick Leeson has his own official website here.
The DVD is labeled Dimension, as the film was released while Miramax was associated with the Weinstein Company.
Posted by Bill Boushka at 7:07 AM