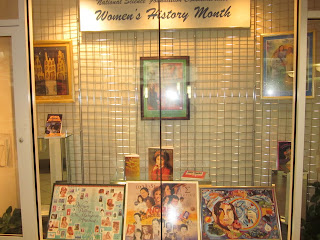 National Geographic Films, along with Match Factory and director Sherry Horman, has brought one searing, epic film biography about a model from Somalia, Waris Dirie (Liya Kebede), titled “Desert Flower”. It is based on her autobiography, “The Extraordinary Journey of a Desert Nomad”.
She was circumcised by force at 3, in a harrowing sequence of horror (as told to a journalist who reminds one of Kitty Kelly) near the end of the film as presented, sold into marriage. (NatGeo says “in the deserts of Africa, many girls’ lives are arranged.”) She escaped to London, and followed a woman  Pushpa (Meera Syal) around the streets until she found a place to stay.  (I wondered how I would have reacted if put in Pushpa’s position.) Working at a fast-food pub, she was noticed by a photographer (Craig Parkinson) who would eventually bring her into the world of fashion (turning some sequences of the film into a likeness of “September Issue” or “Picture Me”)--surviving some very sensitive situations.  She marries (Timothy Spall) to get around immigration laws, enduring a harrowing sequence where British immigration officers visit their apartment and make sure that the marital bed is really used as such.

Eventually, she would go to New York and the UN and become a spokesperson against the brutal treatment of women in African culture, something not called for by the Koran (despite its supposed motivation in notions of "purity", and the satisfaction of men after marriage).  She says that the practice provides a major part of the explanation for the widespread poverty of most of the continent.
The film (1:85:1) has breathtaking sequences of nomadic life in East Africa, actually filmed in Djibouti.
The official site for the film is here.
I saw this film at Landmark E-Street in Washington DC late on a Tuesday night before a sparse crowd.
Posted by Bill Boushka at 6:38 AM