ABC's "Best in Film" in all time focuses on Spielberg: E.T. and CE III 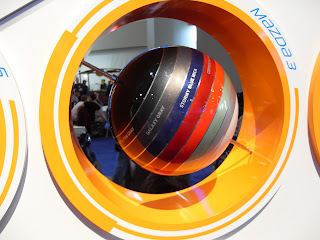 ABC decided to throw its own post-Oscar party tonight with its “Best In Film” two-hour special, with the main link here. The results wee based on audience votes.
“Gone with the Wind” won the “best of all time” audience award, and the penultimate line from Rhett Butler in the fog at the end won best line. When I was growing up, my parents vacillated between calling this and “From Here to Eternity” best picture. I once sat through the original “Moulin Rouge” with them.
But the most interesting part of the show was the focus on earlier Steven Spielberg. The show’s producers obviously love “The E.T.” (1982), which presents no adults for the first half. Spielberg had no children at the time but became a dad to all the child actors in the film. We all remember the lovable ET and his aerial bike – much nicer than “Paul”, about to come out.  The film, curiously, was shot in standard aspect ratio but had stunning stereo for the time.
But particularly interesting is the memory of Spielberg’s “Close Encounters of the Third Kind” (Columbia), which I saw twice while living in NYC, once in December, and then again the night of the infamous January 1978 blizzard when a “boyfriend” invited me to see it again. The film has a prequel where the missing Navy planes from the Bermuda triangle reappear, but the main story line derives from a rural power outage where a local engineer (Richard Dreyfuss) investigates. Pretty soon his “inception” and official investigations (and some abductions) lead him to Devils Tower, WY, where the space ship comes down. (He even makes a Devils Tower model with mashed potatoes in front of his kids).  In 1997, in fact, a female jogger “went up” near Landers, WY.  The power outage idea could be sinister: a real alien “invasion” could start with a high-altitude EMP blast, introducing immediate chaos all over the world (how about that for a film plot).
The show included a lot of footage of the original 1939 "The Wizard of Oz", remarkable (in technique) in the sudden shift from black-and-white to technicolor to prepare for the Emerald of the city.
Posted by Bill Boushka at 8:40 PM