"Unknown" is a pretty conventional "trick" thriller about a "plot" 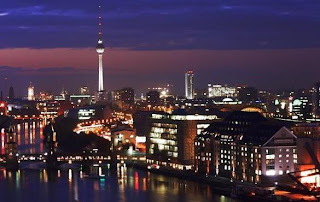 My reaction to the title of this movie is to remember those little test tubes in qualitative analysis in college chemistry. “You’ve got one too many”, the instructor once said, back in 1962.
But the thriller “Unknown” from Warner Brothers, Dark Castle, and German Studio Babelsberg, presents the word as a super-plotted kind of identity theft, in the physical world.  Dr. Richard Harris (Liam Neeson) arrives in Berlin with his wife (January Jones – what a first name for an actress) for a biotechnology conference where sensational developments may occur, that could put a lot of old agribusiness into Chapter 7.  This sort of thing, an international meeting, used to happen a lot in the 1960s novels of Irving Wallace (“The Prize”, “The Plot”, etc).
Now, we see him leave a locked briefcase on a taxi stand, unlikely, and then have go back and retrieve it. That ought to make the audience think it has been set up. There’s a horrific tax accident, and “Harris” winds up being rescued from an icy river (and it’s only Thanksgiving). Then the coma, and then the idea (as in NBC’s “The Event”) that you go back to your hotel and find out nobody knows you exist.


Harris may have a double identity, but he at least knows it. (In comparison, Jason  Ritter’s character  in the NBC series probably doesn’t know who he really is; I’ve covered that on the TV blog).
This film isn’t quite subtle enough for a cameo from Alfred Hitchcock. There is something awry about a thriller where the lead character (and "omniscient observer") knows more than the audience from the getgo.

Frank Langella is every bit as creepy as the master assassin as he was in "The Box".  Maybe he could play Pie'O'Pah if Clive Barker's "Imajica" gets filmed (sometimes rumored, like "Atlas Shrugged").

Compare this film to "The Tourist" (Dec. 13).
The official site is here.
Wikipedia attribution link for Berlin picture from the Spree River http://en.wikipedia.org/wiki/File:Berlin_night.jpg
Posted by Bill Boushka at 5:15 AM