"Twelve Thirty" is an interesting midwestern film that anticipates some shades of "Craigslist". 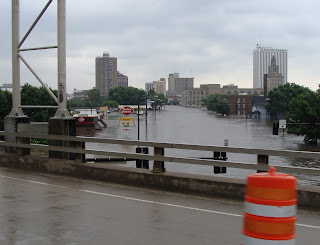 The non-profit Avalon Theater in northwest Washington has been showing Jeff Lipsky’s talkative coming-of-age family drama “Twelve 30” (the “Twelve” gets spelled upsidedown) or “Twelve Thirty” (and not "Twelve Moneys").  A young man Jeff (Jonathan Groff), claiming to be an aspiring writer and perhaps architect of 22, consorts with the adult female children of another Iowa family headed by Vivien (Karen Young) and her bisexual husband Martin (Reed Birney).  Claiming to be a virgin, his sincerity gradually gets him into trouble, possibly testing his own moral limits and serious legal consequences.   Jeff doesn’t go as far down the wrong path as the Craigslist guy, but the film gives more ideas as to how it might happen. On the other hand, the film really doesn’t make as much of Martin’s “other life” as it could, however. This is a film about the impulsive behavior that goes on in the "straight world."
One of the most interesting aspects of the film is the backstories told by the two older parents, particularly Vivien’s story of the difficulties and waiting lists she faced getting her father (with dementia) into a nursing home.  Martin tells a story about being bullied for being “different”, and yet in the film, up front, he is about a patriarchal as it gets.
This film, which doesn’t seem to have official distribution yet  (I hope Strand Releasing will look at it), also is not rated;  but the explicit scenes are necessary and make the case that “NC-17” should not be viewed as a death sentence for a film’s box potential; there is a real place for films for adults where explicit scenes are necessary to make certain kinds of points.
The film sometimes makes effective use of the Cedar Rapids location.
The official site for the movie is here.
Wikipedia attribution link for picture of Cedar Rapids flood, link here. I visited the city once, in November 1998.
Posted by Bill Boushka at 9:01 PM