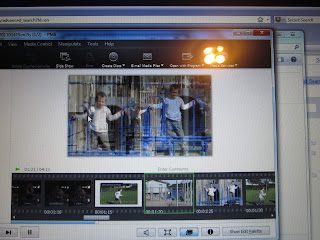 I was treated (or perhaps subjected to) a short film by Sony itself, on the PMB (Picture Motion Browser) application, on my new Handycam CX550v camcorder.
It was a real short film, about 7 minutes, mostly about golf and lifestyle pleasantries. No dialogue, just a lot of pretty images or courses and funky music. Just call the film "Handycam PMB".
I made a film of about 10 seconds, where I talk about my own debutante experience in 1960, in my own basement, in front of a small grandfather clock still there.  The playback really looked sharp. It had file type “.moff” (and “.m2ts”) and the files show up with a Windows 7 search, but I can’t find them in Windows explorer.  The film looked great, in HD, but took 14.5 meg for 10 seconds.  The Sony film took almost 400 meg. So I don’t know yet how you get one of these films (when you shoot it and own it) up on YouTube.
A much lower quality video on a cheap digital camera still takes about 14 meg for about the same amount of time.  It seems to run a meg a second.
This little short film, called "Drippy", came from the cheapo camera, for now. (It's a Canon, a bit like Ashton's Coolpix, but a little better.) I'll have to figure out how to get HD uploaded. I don't know if Blogger or Wordpress will accept it.

I may take up making a short subject about the abandoned Pennsylvania Turnpike tunnels (like Sideling Hill, used in "The Road") as my first little filmmaking project with the HC cam.  I need to get a new mountain bike, too, to do that. I don't know how I would get it uploaded to YouTube if it's that big in meg.   But I think something like this, however unusual, would be of widespread interest and would get lots of traffic.  I want to get to this by March, when it warms up.

Also, somehow the brand name "Handycam" makes me think of "handyman", the idea of paying your dues in the workplace.
Posted by Bill Boushka at 6:06 PM