"The Rite": a "true" story about training an Exorcist? 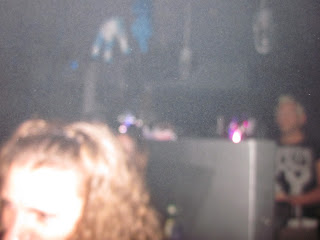 “The Rite”, based on a book by Matt Baglio and directed by Mikhael Hafstrom, is supposed to be a true story of how a likeable young seminarian Michael Kovak (Colin O’Donoghue) became one of the country’s few licensed Exorcists, and he had to learn his craft in Rome from the master  Father Lucas Trevant (Anthony Hopkins), who, the logic of storytelling demands, would need an exorcism himself.  The film mentions an interesting point, that demonic possession is becoming epidemic and pandemic, as if like in "28 Days Later".

Hopkins here does a repeat performance; it seemed to me that ten years ago he was a lot more convincing as a Hannibal about to return to public life. (Remember the open skull and dinner in that movie?)
In the beginning, Michael is confronted with a choice between becoming a mortician (the family business, and not just a front for Halloween, like the Black Suit that I used to wear) and a priest. At one point another student asks him if he’s gay (remember, the Vatican recently wrote about “incompatibility” because lack of “paternity”), but his real problem is “Doubt”.  Yup, he has to be a doubter before he can become a believer, as was Mother Teresa, and Father Trevant.
The sequences in this movie seem a bit arbitrary; there’s not the steady progression that we saw in the 1973 masterpiece “The Exorcist”.   You want to see Kovak more engaged, even at risk, physically (and maybe Trevant's many cats should like him).  But there’s a great line where Kovak tells the Devil in Trevant to “Leave”.  I remember one evening in 2005 when someone said that to me in a bar, early, before it was crowded, when I seemed like a lurking millstone.
New Line now goes through the Warner Brothers trademark to introduce itself as the owner of the film. It’s fallen a bit since its glory days with the LOTR films.
The official site for the film is on WB, here.
Posted by Bill Boushka at 7:43 PM