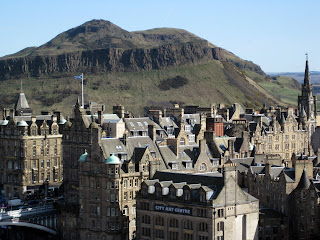 Sylvain Chomet’s new animated feature “The Illusionist” (“L’illusionniste”) doesn’t fascinate me with the wonders of the earlier film “The Triplets of Belleville”, where a  competitive cyclist (with all required of “riders”) navigates wondrous mechanical miniatures (including many toy trains) after being “kidnapped”, and where there is that wonderful song.
Here, a Parisian magician travels to Scotland a meets a young woman, leading to tame domestic situations in a flat (not the least of which is the annoying blinking night light of “Joe’s Hotel”). Again, Chomet treats us to physical comedy (rather like Mr. Hulot’s Holiday from the 50s), and a tepia rendition of Edinburgh (which I personally visited in 1982, though staying in an outskirts motel).  And there are some nice steam trains, extracted from the world of Harry Potter.
The music, with its happy waltz theme, does venture into some impressionism sometimes, with interesting piano effects reminding one of Ravel.  Much of the music is by Chomet. 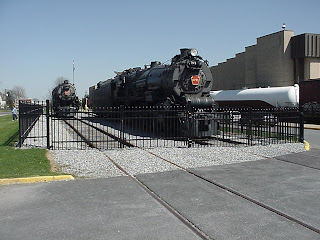 Probably by coincidence, this film shares a title with a strong 2006 period-piece film by Neil Burger, “The Illusionist”, starring Ed Norton as a magician, challenged economically, in 1900 Vienna (from Bob Yari Films).  That would be followed soon by Newmarket’s “The Prestige”.
Sony Pictures Classics has an official site here. I wish Warner Brothers and New Line would reinstate their indie labels (including Picturehouse); Sony is gobbling up a lot of the mainstream "independent" market.
Wikipedia attribution link for Edinburgh picture    The cliffs were drawn in the film.

The second picture is mine, taken in 2004 at a museum at Strasburg, PA.
Posted by Bill Boushka at 4:26 PM