"Undertow": A drama from coastal Peru challenges our ideas about monogamy (more than a "gay ghost story") 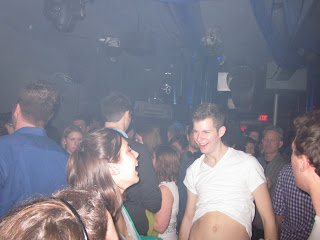 Back in 1994, the GLBT outdoors group Adventuring lost a member who, swimming alone, drowned in a rip tide off Rehoboth from a distant Atlantic hurricane.
The little film “Undertow” (“Contracorriente”) from Peru (with  a lot of international help) and director Javier Fuentes-Leon, is based on the dangers of that, off a barren (desert-like but cool) fishing village north of Lima, distant from the Andes.   A handsome, charismatic fisherman and painter (Santiago, Manolo Cardono, who looks 100% European) disappears and apparently drowned.  But that affects the life of Miguel (Christian Mercado) and Mariela (Tatania Astengo); the movie opens an outer view of her swollen womb. Miguel is very attentive and passionate about upcoming fatherhood, but he has a secret second love life, with Santiago, which seems to serve a different purpose, his own need for more polarity.
Pretty soon he sees (and embraces) Santiago, first alone, but then in town and eventually around Mariela, when no one else sees him. We have a gentle "Ghost Story" (not exactly Peter Straub's complex thriller of a book and weak 1981 film adaptation).  His behavior, getting distracted, strains the marriage, and there are rumors. But we have a film not so much about a double life of a gay man, as the story of a true bisexual, and one which questions the moral requirement of monogamy -- not just physically, but in terms of emotional attention. Creativity is at odds with adaptive social requirements.
The official site for the film is here.
The film comes from Wolfe Releasing, and Dynamo and Elcavo.
The moderate audience in the small Landmark E Street (Washington DC) auditorium really liked the movie Saturday night, and there was a lot of discussion of the plot in the long hall there afterwards.
There was another film called “Undertow” in 2004, from United Artists and director David Gordon Green, about a father and two sons living in rural Georgia, and a tragedy that follows the arrival of a lost uncle. I saw that at the old Dupont theater a few years ago.
Posted by Bill Boushka at 6:05 AM