"Somewhere": An actor is reunited with his daughter before walking out of life (maybe he will anyway) 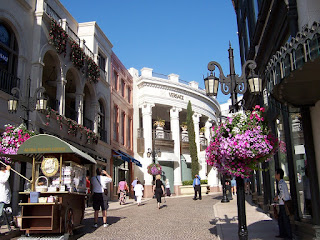 “Somewhere” is actually the name of a song in Leonard Bernstein’s “West Side Story”, with a meandering tone row used to end the entire opera.

I don’t know if Sofia Coppola thought about that in titling her new film “Somewhere” and with any movie from American Zeotrope and the Francis Ford Coppola clan, you never know (remember “One from the Heart” and its small frame?)

The interesting thing about this film is the style. The story of the “identity crisis” for late-thirties-something Johnny Marco (Stephen Dorff) is presented in a series of near-stills. The film opens with his driving his black sports car circularly around a desert race track. Later he gets made up to look like a monster, he sits still for at least two minutes with plaster covering his face (a kind of Michael Carbonaro shaving cream stunt) while the makeup team looks for the other props. Then he’s in a massage, only to discover that the male masseur is gay. Actors go through a lot becoming other people just for us.

His ex-life sends his eleven year old daughter to visit him. Played by Elle Fanning, she seems mature beyond her years, and is a very good cook. When Dad takes her to Italy for a promo tour, the camera dawdles on her making Eggs Benedict in the hotel suite.

But he must come back to California and leave her at a summer camp near Vegas. Then what does he do with his life. Coppola toys with the idea of giving up everything and walking away. Is that typical of her films?

The film makes very effective use of southern California locations, including a famous Beverly Hills hotel.

The low key music is by Phoenix.

The website for the film is here (Focus Features).

(Note: this post was deleted and replaced because of a technical issue; url suffix may change.)
Posted by Bill Boushka at 7:02 AM