"Rabbit Hole": Quiet film about a family tragedy, and Eckhart had to do some prep 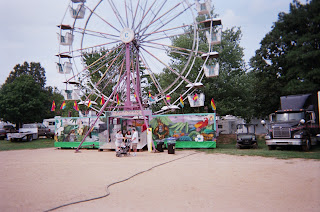 The latest minimalist film of the Oscar season, “Rabbit Hole”, comes from a now substantial studio (Lionsgate), and the title has little to do with Alice in Wonderland, and certainly no 3-D.  Directed by John Cameron Mitchell, it’s based on a play by David Lindsay-Abaire. The slow paced movie seems to want to remain a stage play, too.
I don’t know how well I buy the premise.  A couple’s young son has been killed when struck by an inexperienced but not really reckless teenage driver Jason (Miles Teller), and the mother Becca (Nicole Kidman) starts socializing (maybe inappropriately) with the kid, meeting him in a library and getting interested in his most impressive comic book about “rabbit holes” or “worm holes”.  The topic, given recent tragic events, may seem to belong to the world of schizophrenia; but in theoretical physics, the idea is compelling. Maybe a soul can move among parallel universes between incarnations.  In any case, the comic book was so well done that I wondered if I could order it on Amazon.
Howie (Aaron Eckhart) really grieves, and this movie makes the case that support groups don’t help too much.  Eckhart looks diminished by his previous role in Fox’s “Thank You for Smoking”. He’s gaunt, and his chest is waxed.  Actors go through a lot becoming (at least in looks) what you might not want to be (remember what Ashton Kutcher said about his prep for “Killers”  (reviewed here June 6).   I once heard, from a New Age group in the Mojave Desert some time around 1978, that the ancient Egyptians engaged in body shaving when having family or even animal (especially dog or cat) losses.  Perhaps there’ s a message here.
But Howie “socializes” with Gaby, and Sandra Oh, playing this part, seems as steady as in all her roles (remember her in Lionsgate’s “Hard Candy”).
The film is set in Yonkers, NY, and the family home is shown around the Hudson River. The film earned a New York State badge but not the “Made in NY” trademark for the credits.
The official site for the film is here.
Lionsgate did not play any trademark music for itself or any production companies in the opening of this very quiet film; a link to the musical ritornel is on the Dec. 6, 2009 posting here.
Posted by Bill Boushka at 6:52 PM