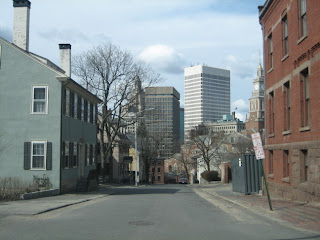 On Monday, Jan. 3, Lifetime Television aired the controversial docudrama about med student Philip Markoff, “The//Craigslist. Killer” (the title of the film was coded as if it were from an IBM mainframe JCL DD statement, a curiosity indeed), with the “Mr. Hyde” character played by Dallas-born Jake McDorman. The film, broadcast in widescreen anamorphic, is directed by Stephen Kay.

It’s a pretty shocking idea that a likeable, “perfect” male medical student (Markoff) would have such an uncontrollable dark side. There is a scene at a med school lecture where Markoff is quietly browsing Craigslist when the professor calls on his with a question about genetics, which he answers correctly.

The movie asks as much about the reliability of a human’s character as about the instrumentalities on the Web that make it so easy for people to hide for a while as they “do bad”. In fact, Craigslist has attracted attention not only for the way “adult” services at one time had contributed to its profits (resulting in the constitutionally inappropriate “activism” by a number of states’ attorneys general). It has also attracted reverse controversy because of its reliance on "old" "Web 1.0" technology.

Early, he proposes marriage(Megan McAllister, played by Agnes Bruckner , “Blue Car”), going through the hoops of getting her father’s blessing; he’s played all the competitive games of the heterosexual world “correctly”, and then look at what happens.

His girlfriend has to deal with the gradual process of discovery from the media, and then the cops stop her when he is riding in her front seat, in a chilling catch. She insists the police have the wrong guy, and say the Boston police are the worst in the country (remember “The Town” and “Mystic River”?) William Baldwin plays the lead cop.

Even the medical school professor disbelieves the cops, saying that medical school places such demands on someone that it would have been physically impossible. But he, “The Perfect Guy”, throws it all away. It’s harder on the girl friend who loved him than it is on him. The ending brings grief beyond belief, as he smears messages to her on the jail cell wall as he dies at his own hand. He is not Shakespearian.

In a way, Markoff’s demise seems like an extension of the collapse of the fictitious character Nick Fallon (Blake Berris), the likeable geek on the soap opera “Days of our Lives”.

After the film, Lifetime aired the verbally graphic documentary featurette “Beyond the Headlines: Catching the Craigslist Killer”. The film even discussed security procedures, like not advertising a room number, followed by “the oldest profession”. Women in this line of “work “ sometimes did not complain to police because of their “illegality.”  There is an interesting sidelight in that the police had to deal with the idea in their forensics that a wardriver could have intercepted wireless signals from the women's rooms in an impersonation scheme.

The feature film, while both unpleasant and necessary, seems suitable for theatrical release, too.