"Left Behind" movies: how well does evangelical apocalyptic fiction translate to film? 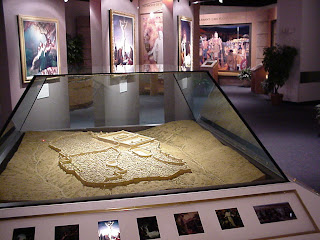 The “Left Behind” “apocalyptic fiction” novels (Tim La Haye)  have become best sellers within the evangelical community. The movies are a bit stereotyped, but reviewing them brings up some issues.
I rented “Left Behind II: Tribulation Force”, directed by Bill Corcoran (DGC), from Cloud Ten pictures (2002). The DVD was full-screen, an annoyance (it ought to be 1.85).
The film starts one week after The Rapture, with super journalist Buck Williams (Kirk Cameron) describing the worldwide “mayhem like me” on GNN (obviously CNN). One aspect of the film that does work is that Buck is a very likeable person, clean-cut, virile, almost perfect.  (Is he a young Anderson Cooper?)  But he didn’t get raptured, so he must not have been a Believer. But he has become one now.
This gets into the religious debate on pre-tribulationism and post-tribulationism, and I recall a pastor on the radio making the “post” case while driving a rental car around Houston back in the 1980s. The obvious point is that in the “post” scenario, more people get a chance to be “saved”.
But the film seems a bit wooden. You don’t really experience the world as it would really be a week after a Rapture. Maybe you need Imax 3-D for that, a kind of Inception.  There doesn’t seem to be that much hardship.
Buck goes undercover to tail the anti-Christ Nicolae Carpathia (Gordon Currie), who seems like a thinly disguised neo-Nazi.  Okay, you make the point that world government is a “humanist” sham.  I don’t think it comes through here; if you’re going to make a right-wing movie, do it with some realism. The film does make a point that a journalist can gain a lot of “power” himself, but so did “Green Hornet”, reviewed here last week.
In the end, there are some “miracles” based on faith, near the Wailing Wall in Jerusalem (the “Making Of Left Behind II: Tribulation Force” featurette on the DVD explains how it was all set up in Toronto sound stages). The wise men have “heat vision”, and at one point Nicolae’s inner nature is revealed visually as if he were a covert “reptilian” from the show “V” (where’s Anna?)   I guess you can’t be “openly extraterrestrial” or “openly angelic”. There’s also a kind of “Red Sea” scene where soldiers are paralyzed.
I had seen the earlier film ("Left Behind") (2000, directed by Vic Sarin) in Minneapolis, and see from my notes that in that film Buck reports the Rapture as if it were a super 9-11. 150 million people disappear, leaving clothes (“Sartor Resartus”) intact with no bodies, starting on a plane. (Yup, planes fall out of the sky and freeways are cluttered with crashes.)   That film has climaxed with a shoot-up in a board room resembling a similar scene in Lionsgate’s “Dogma” (1999, dir. Kevin Smith), where Matt Damon and Ben Affleck play two angels living as a male couple in Wisconsin, and where Matt shoots up a board room in the film’s middle (and Ben wears wings).
The best film of this sort is probably New Line’s “The Rapture” (1991, dir. Michael Tolkin), with Mimi Rogers as the swinging single who stumbles on a religious “conspiracy”, and X-file’s David Duchovny. At the end, trumpets sound and jail walls really crumble. (Why not title a film "The Rapture of the Believers"?  I remember a Sunday night sermon in early 1983, at the old MCC Dallas on Reagan St, where Rev. Elder Don Eastman introduced the idea of The Rapture.)
There’s another franchise, from New Providence, “The Omega Code” (1999, dir. Robert Marcarelli), and “The Omega Code II:  Megeddio” (Brian Trenchard-Smith), where the “fake peace” and anti-Christ ideas are developed.  I saw both films in Minneapolis.  Michael Biehn appears. It’s hard to find the Anti-Christ just in the European Union.
One warning I noticed on the Cloud Ten DVD of LBII: you need an exhibition license from the distributor to show the DVD, even at a no-charge non-profit event like at a church or Sunday School. I’ve not noticed this before on other DVD’s or CD’s.  (For example, MLB and NFL warn that you can’t charge others to see their broadcasts; I guess sports bars would need licenses to have cover charges for the Super Bowl.)

Cloud Ten has an announcement of a "Left Behind" remake here.


Cloud Ten offers the following embeddable trailer for the first film on YouTube.
Posted by Bill Boushka at 9:07 AM