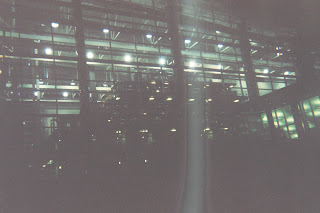 Seth Rogen actually helped write Michel  Gondry’s new 3D “comic book” genre piece from Columbia, “The Green Hornet”.  OK, it was actually a radio show, but it’s the same.  Big time issues packed into stereotyped action entertainment for the kids.
Tom Wilkinson plays newspaper patriarch  (The “LA Sentinel”) James Reid.  Wilkinson (“In the Bedroom”) playing a caricature of me?  Reid thinks he owns the news, and I could say that this is sort of my paradigm with the book and websites “do ask do tell”.  He thinks he values his integrity, but an ambitious District Attorney Scanlon (David Harbour) has managed to buy or him off (or shake him down), getting him not to cover unfavorable news.  Even his own son Britt can’t get dad to that. (“You’re the news, too.”)   The other villain is Russian mafia chief Chudnofsky (Christopher Waltz) who has shaken down the club owner (and “dealer”) Tupper (Edward Furlong) in a way that invokes the Righthaven copyright trolling. (Imagine that the LA Sentinel is based on the Las Vegas Journal Review!)  It also reminds me of the way the mafia controlled NYC gay bars back in the 1960s.
James dies of a bee sting (which may have been plotted -- the "Green Bee" mutates to "The Green Hornet"), and son Britt (Seth Rogen) takes over, and grows up quickly, needing his superman sidekick Kato (Jay Chou), whose talents for invention run from coffee machines to I.T.  They make a tag team (with Britt's playboy hobby of reverse vigilantism).  At first, Britt cares nothing about the news, but eventually changes his mind and wants his “integrity” too.  But I guess the film says, no one should own or encircle the news.


Don't mix up "The Green Hornet" with "The Green Lantern".
Here is Columbia’s site.  Also this film is connected to NOW Comics.
The 3D is effective, not overdone; and I like the "solid geometry" exercise during the credits.  Beethoven's Eroica Symphony figures into the soundtrack, but there's no use of the "golden dissonance" played so effectively in "The Soloist".
Sony UK provides this featurette on YouTube.
I saw this at a 10 PM showing in a Regal in Arlington, large auditorium, the only person there. It seemed like a private showing just for me.

Wedding Limo Toronto : Builders of stretch limousines purchase stock cars from manufacturers and modify them, and most are in the United States and Europe and cater mainly to limousine companies. Toronto Wedding Limo

This comment appears to have been intended for "Cosmopolis" Aug. 29, 2012