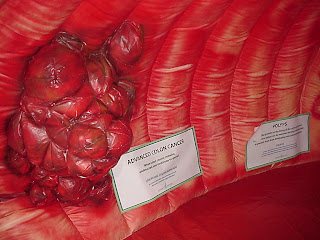 On January 24, Lifetime aired the film “Final Sale”, by Andrew C. Erin and the Johnson Group.  The title reminds me of “first sale” doctrine in copyright law, but the actual meaning is grim. A young woman (Kaitlin Doubleday)  is told she has two months to live unless she gets a kidney transplant. (People can live a long time on dialysis, even though the prognosis isn’t good in the long run.) She finds out that her kidney came from a teenage girl who sold her organ for money and died in the operation, in a “business” controlled by the mafia. She takes on the moral challenge – and then the movie becomes a stereotyped thriller, without quite the credibility of “Erin Brokovich”.
The film could have gone into a different direction, emphasizing the real medicine. The woman probably had juvenile diabetes (I know someone whose wife died at 36 from complications of juvenile diabetes, despite amputations and two transplants.)  The gravity of the disease deserves film, now that it has a celebrity like Nick Jonas to fight it.  Dialysis, whether peritoneal or regular hemodialysis with shunts and fistulas, is definitely not cosmetically appealing and is disruptive, and never as effective as a transplant.
Film could also go into the “moral issues” around donations of kidneys to family members, and to organ donation at life end (which would exclude HIV+, but not HIV- gay men in the US, (website url link.)  However in Canada HIV- active gay men could be excluded (website url link).
I question whether the film got the law on donations right.
The official site for the film on Lifetime is here.   It re-airs Feb. 6 and 7.
Oscar Nominations Announced this morning.
I think January is too early for the announcements, and Feb. 27 is too soon for the ceremony. In Minnesota, the Minnesota AIDS Project always a breakfast the Tuesday morning of the nominations, with the benefit at the State or Orpheum a month later.
There are ten announcements for Best Picture. James Franco, while hosting, could get presented his own awards. I think it’s funny that Eisenberg gets a nod for playing Mark Zuckerberg (really, he was way off the mark).

ABC seems to own the Oscar site this year, here.
Posted by Bill Boushka at 8:14 AM